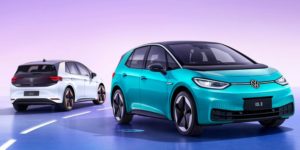 Volkswagen will produce and sell its ID.3 electric model in China in the future. The China ID.3 will be produced by SAIC-VW together with the ID.4 X and ID.6 X in Anting and will be launched in the fourth quarter of this year.

Volkswagen has thus officially confirmed rumours that had been circulating for some time. The compact electric model is to be shown for the first time in China at the Chengdu trade fair, according to the Wolfsburg-based company. After the fair, a pre-booking system will be launched. With this early booking system, Chinese customers will be able to reserve the ID.3 similar to the market launch in Europe – only with significantly shorter deadlines if deliveries are to start this year.

As mentioned, the ID.3 for China is built at the MEB-only Anting plant, which VW operates together with joint venture partner SAIC. Unlike the ID.4 X and ID.6 X, which are also produced there, the ID.3 does not have the “X” suffix, according to the announcement. This suggests that there will be no FAW-VW version of the ID.3 – the ID.4 and ID.6 are known to carry the suffix “Crozz”.

“Volkswagen’s global electrification offensive is rapidly gaining further momentum,” VW CEO Ralf Brandstätter said. “After the ID.4 and the ID.6, we are now launching the ID.3 as the third all-electric model series in China within a mere six months. We are thus underscoring our ambition to occupy a leading position in the market for electric vehicles in China as well as Europe.”

The launch of the MEB models in China was bumpy, with just 1,500 ID.4s delivered in May. In the meantime, the ID.6 is also available from both SAIC-VW and FAW-VW, and in July there were as many as 5,800 MEB models. For the current year, VW says it is aiming to deliver 80,000 to 100,000 ID.4 models to Chinese customers – “subject to the supply of semiconductors”.

Volkswagen China CEO Stephan Wöllenstein states in the statement that the delivery figures are “in line with our expectations”. “With the ID.4 and the ID.6, we have successfully introduced two strong model series to the market in recent months,” Wöllenstein says.” The feedback from our customers is promising. With the ID.3, we are now creating an offer for our customers in the important compact segment and, together with the other ID. models, cover a large part of the market.”

VW does not specify how much the ID.3 will cost in China or which drive options will be offered.