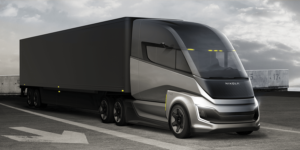 The electric truck manufacturer Nikola has reached a strategic agreement with Bosch for the production of fuel cells. Among other things, Bosch will supply Nikola with key components that will then be assembled into power modules at the truck maker’s US plant.

According to Nikola, the agreements with “Bosch Group companies” will enable it to build the fuel cell power modules at its plant in Coolidge, Arizona, and use them in its Class 7 and 8 fuel cell trucks. Bosch will supply the fuel cell stack, the compressor, the power electronics and the control unit with sensors, among other things, here.

What is clear, however, is that the first application will be in the US version of the Nikola Tre, which is scheduled for 2023. This Class 8 vehicle (i.e. over 14,969 kilograms) is intended for regional transport and is expected to have a range of 500 miles (804 kilometres).

The Tre FCEV is also known to be coming to market in Europe, using “the same fuel cell power modules”. Since the Tre for Europe is built in Ulm by joint venture partner Iveco, it seems possible that the modules supplied fully assembled by Bosch will be used here – and not those assembled by Nikola in Arizona.

According to the Americans’ statement, the agreement allows the power modules to be tailored to the needs of the Nikola vehicles, resulting in “competitive cost and performance advantages”. As a result, the large US Nikola Two FCEV Class 8 truck is expected to have a range of 900 miles, the equivalent of 1,448 kilometres.

“This announcement is the result of a multi-year collaboration with Bosch,” said Nikola CEO Mark Russell. “After an extensive analysis of the best options in the market, we are proud to enter into this strategic partnership with Bosch.”

The Tre’s “Alpha” test vehicles currently on the road will already use fuel cell power modules “from the agreements”, according to Nikola. Pilot tests with customers are also due to start at the end of 2021.

Bosch has been a development partner of Nikola for many years and had invested in the company in 2019. After a shortseller attack, many investors had lost confidence in Nikola, founder and CEO Trevor Milton had to vacate his post – in the meantime, the New York State Attorney General’s Office has charged Milton. A planned participation of General Motors never materialised, the electric pickup project Badger had to be stopped by Nikola. Instead of cooperation, a memorandum of understanding was concluded according to which GM is to supply fuel cells for Nikola’s planned trucks – but only if both parties can agree on the conditions and Nikola pays in advance. Since Nikola now buys the fuel cells from Bosch, no agreement could apparently be reached. Bosch itself had reduced its shares in December 2020 after a holding period expired.

As a result, Nikola had to realign itself under new CEO Mark Russell. In February 2021, the target for the current year was reduced from 600 to 100 vehicles for customer testing. In August, this target was revised downwards again, to 25 to 50 vehicles – due to “numerous” delays related to the procurement of parts.