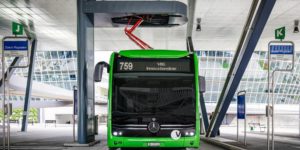 Mercedes has delivered a new variant of the eCitaro to Switzerland. With the use of charging rails, the electric bus is supposed to be able to drive around Zurich airport for up to 22 hours and 370 kilometres a day.

With the 300 kW fast charging, the Glattal transport company (VBG) wants to carry out an extreme operation not far from Zurich in the future: The eCitaro is to be on the road there 22 hours a day in regular service from September. “This will allow the all-electric low-floor city bus to demonstrate its high performance,” Daimler said in a statement.

Specifically, the eCitaro is to be used on VBG’s ‘Innovation Line 759’. On this line, the company is testing innovative technologies in regular service. The route runs from the municipality of Wangen to Zurich Airport. One round trip is 27.4 kilometres long and includes 28 stops. The vehicle’s 264 kWh battery is charged by cable during the two-hour operating break in the depot. During the 22 hours of operation, only intermediate charges are possible during the short standstill at the final stop at the airport.

If the test is successful, VBG plans to completely electrify line 759. Until now, the line has been operated with seven diesel buses. According to the announcement, these cover 635,000 kilometres per year and burn 235,000 litres of diesel. The electric bus, on the other hand, is charged exclusively with electricity from renewable sources.

VBG is responsible for public transport in the Glattal, Furttal and Effretikon/Volketswil area on behalf of the Zürcher Verkehrsverbund (ZVV). The area covers 22 municipalities. It operates more than 50 bus lines as well as the two lines of the Glattalbahn. The approximately 119 buses carried 22.6 million passengers last year.