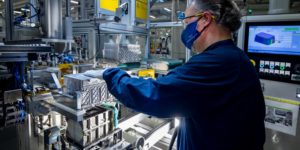 Valmet Automotive has received a second order to produce batteries for the battery plant in Salo, Finland. The new order will expand production at the Salo plant to include high-voltage batteries.

So far, the Salo plant has mainly assembled 48-volt batteries for corresponding hybrid vehicles. Valmet does not specify whether the high-voltage batteries from the new order are intended for battery-electric vehicles or plug-in hybrids – “further details on the new order” cannot yet be disclosed. Only this much: the start of production is still planned for 2021.

“Valmet Automotive is growing very fast in battery business,” says Jyrki Nurmi, Senior Vice President EV Systems, Valmet Automotive. “With the new customer deal for the Salo plant, we have already announced five battery manufacturing contracts in our Finnish operations. This is an integral part of our growth strategy that focuses on EV systems.”

Valmet had started the expansion of the Salo plant at the end of 2020, adding 3,500 square metres to the plant to now 23,500 square metres. Most of the new space will be used for logistical purposes, but the production area has also been expanded. The production line for the new battery model will be partly housed in the expanded factory area.

Personnel are still being sought for the new production. According to the supplier, the Salo battery plant employs about 500 people. Coming Autumn, 250 more positions are to be filled – mainly in production, logistics and quality.

Valmet already manufactures high-voltage batteries for automotive customers, and there are already three orders for the second Finnish plant in Uusikaupunki. The Finnish company is also currently building a battery assembly plant in Germany, in Kirchardt near the Audi plant in Neckarsulm.

It is now clear that Volvo Cars is the customer. As Valmet states, it is assembling high-voltage batteries for the plug-in hybrids of the Volvo models S60, V60, XC60, S90, V90 and XC90 at its plant in Salo, Finland. Production has already started.

Shortly after Valmet announced the order in September, without naming the customer, Volvo had, in turn, announced that it would increase the electric range of its plug-in hybrids based on the SPA (Scalable Product Architecture). With new cells, a third cell layer can be installed in the housings, increasing the energy content of the battery from 11.6 kWh to 18.8 kWh. This should enable an e-range of up to 90 kilometres according to WLTP.

The special feature of the SPA-based plug-in hybrids is that the battery is not installed under the boot or the rear seats, but in the cardan tunnel. This installation position is the safest in the event of an accident, but it also severely limits the available installation space.