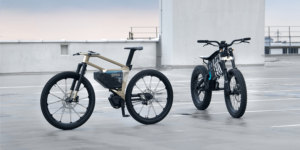 In addition to the BMW Motorrad Concept CE 02, which is somewhere between a motorbike and a scooter, the Munich-based company is also showing the BMW Motorrad Vision Amby (Amby stands for “Adaptive Mobility”), a hybrid between a bicycle and a motorbike, and the BMW i Vision Amby, a high-speed pedelec for urbanists. The two “Amby” studies, one from BMW Motorrad and one from BMW i, are intended to interpret “the basic idea of adaptive urban mobility on two wheels in different facets”.

Both vehicles have an electric drive with three-speed levels for different road types. The drive allows up to 25 km/h for use on cycle paths, up to 45 km/h on inner-city roads and up to 60 km/h top speed on multi-lane roads and outside towns. However, as BMW notes, a helmet, insurance licence plates, and an appropriate driving licence are required for higher speeds.

The differences, on the other hand, lie in the design and operating concept. While in the high-speed pedelec, the e-drive is pedal-assist so the rider always has to pedal, in the BMW motorbike concept the e-drive is solely responsible for propulsion. Instead of pedals, there are footrests, and acceleration is by a throttle. Because of the pedals, the BMW i Vision Amby has more of a bicycle-like design, whereas the motorbike concept was designed more freely here.

BMW is unsure how exactly the speed steps up to 25, 45, or 60 km/h are to be selected. A manual selection is conceivable, but also the recognition of the road via geofencing technology and an associated automatic adjustment of the top speed. Since the legal framework for such vehicles with a variable speed concept does not yet exist, BMW wants to be an impetus for legislation here.

“For us, the focus is on user behaviour. So the question is, how does the customer want to get around in the future? What demands do they place on their vehicle? This is exactly where we started our considerations,” says Edgar Heinrich, Head of Design BMW Motorrad. Werner Haumayr, Head of BMW Group Design Concept, adds: “Seemingly fixed categories are breaking down everywhere – and that’s good. In the future, classifications such as ‘car’, ‘bicycle’ and ‘motorbike’ should not determine what we think, develop and offer. Rather, this paradigm shift gives us the opportunity to align products with people’s lifestyles.”

After BMW presented concepts for an e-bike and an e-scooter in July, the first licences were granted to partner companies for production in the run-up to the IAA.