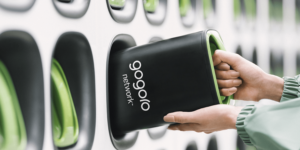 The combined company will focus on accelerating the global expansion of Gogoro’s subscription-based battery swapping service along with its electric vehicle and component sales business. The new, combined company will be named Gogoro Inc. and will be listed on the Nasdaq under the ticker symbol “GGR.” The transaction closing is targeted for the first quarter of 2022.

Gogoro has moved quickly in the last couple of years. Most recently, the Taiwanese micromobility and battery swapping specialist announced that it was teaming up with electronics giant and contract manufacturer Foxconn. Young Liu, Chairman of Foxconn, added the partnership was to enable “mass distribution of Gogoro’s smart battery swapping ecosystem and vehicles.” Foxconn and Gogoro will also begin collaborating on R&D projects, including smart batteries, vehicle engineering and manufacturing. Foxconn is also on a rapid expansion course and just signed a joint venture for electric vehicle manufacture and supply in Thailand with energy giant PTT.

Gogoro’s expansion plans indeed seem to be panning out well. Earlier this year the company announced expansion plans for China where Gogoro is working with Yadea and DCJ. The core of the partnerships is that both manufacturers will develop electric two-wheelers for the Gogoro Network’s battery swap platform. DCJ and Yadea have also invested in a new company that will be responsible for providing and managing the Gogoro battery swap infrastructure in China. Gogoro now says it will be introducing its battery swapping in China in late 2021

Not thinking small, the Taiwanese company has also set foot in the world’s other most populace country, India. Here, Gogoro and India’s Hero MotoCorp are forming a joint venture for bringing battery swaps to India. Hero also wants to use Gogoro technology for new electric two-wheelers for the Indian market.

“Gogoro is transforming urban mobility in the world’s most densely populated cities by changing how people use and share portable energy,” said Horace Luke, founder, chairman, and chief executive officer of Gogoro. “Much of today’s world commutes on two wheels, and cities are embracing sustainable energy and smart city technologies in unprecedented ways. One of the greatest challenges is transitioning from legacy personal transportation systems to more intelligent and sustainable mobility solutions. Gogoro is well-positioned to transform the urban mobility landscape and capitalize on the electric transition of more than a half-billion two-wheel vehicles.”

The proceeds of Gogoro’s stock market entry will go towards expansion into China, India and Southeast Asia as well as continued research and development of Gogoro’s leading battery swapping ecosystem and its smart, sustainable urban mobility solutions. The transaction closing for listing on the Nasdaq is targeted for the first quarter of 2022.