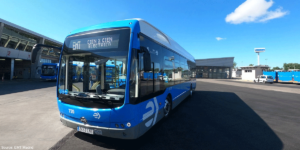 The partners have committed an initial $250 million to the initiative, which will be focused on both private and public organisations looking to electrify their fleets. The two corporations will offer a comprehensive solution including electric vehicles, charging infrastructure, and depot design.

Since BYD is already the world’s largest electric bus manufacturer and a giant in other EV markets that already makes charging facilities and batteries, it begs the question what exactly the partnership with Vitol should bring BYD. The Vitol announcement was scarce on details, saying only that “Vitol is already in the process of deploying over 300 electric buses in Bogota and is seeking additional opportunities in South America and further afield.”

BYD is famously well placed in public transport markets in South America, with extensive orders in Bogota, and has an electric bus factory in Brazil. The Chinese company has a good foothold in Chile, and in Autumn last year, in cooperation with Enel X and Metbus BYD set up the first electric bus corridor in Latin America in the Chilean capital.

Andrew de Pass, Head of Renewables, Vitol Inc said: “We are excited by the potential and intend to grow our fleet tenfold in the coming years. Fleet owners are looking to minimise emissions and our proposition enables them to do so with minimal capital outlay and outsourced operational risk.”

Bloomberg reports that Vitol has also invested in transportation infrastructure with investments in fuel stations in emerging markets.

Vitol is just one of many international corporations in the oil business looking to transition into renewable energy markets and related business. Oilprice.com reports that Vitol has invested over $1 billion in solar, wind, bio digester projects across the United States, which includes converting waste to energy, hydrogen projects, and a large-scale carbon capture project, Humber Zero, in northeast England. Vitol said it had bought a 10-percent equity interest in Gen2 Energy, which is a Norwegian producer of green hydrogen.