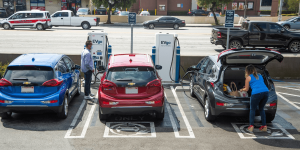 California Governor Gavin Newsom has signed a $15 billion investment package that includes $3.9 billion for e-mobility projects. This is to be used primarily to procure electric utility vehicles and to finance subsidies for private electric car purchases.

The 15-billion-dollar investment package is funding to combat climate change – and according to California’s Democratic leadership, the “largest climate package in the state’s history”. A good quarter of the sum is to go towards promoting e-mobility.

The $3.9 billion package includes funds to put 1,000 zero-emission transportation vehicles, 1,000 zero-emission school buses and 1,000 public transit buses and the necessary infrastructure on California roads. With priority given to projects that benefit so-called disadvantaged communities. Also planned is funding for electric vehicle purchase incentives and special electric car incentives for low-income Californians who replace their old car with a new or used vehicle with advanced technology.

Meanwhile, there is also movement on a core concern of the national government: The US Senate voted in late July by a bipartisan majority of 67 to 32 to move forward with President Joe Biden’s slimmed-down infrastructure programme.

The compromise bill leaves 7.5 billion of Biden’s 15 billion dollars for the construction of a national network of 500,000 charging stations. For the purchase of electric school and public transport buses, the bipartisan draft also provides 7.5 billion – instead of the previously mentioned 45 billion dollars. The reform of tax incentives for electric vehicles is still sought by the Democratic Party, but is not part of the infrastructure package, but of the tax legislation.

Originally, the US president unveiled a two-trillion-dollar investment plan at the beginning of April that included $174 billion in funding to push electromobility. Specifically, the bill proposed a whopping $100 billion for purchase incentives including tax credits for electric cars, said $15 billion for charging infrastructure, $20 billion for electric school buses, $25 billion for electric public transport buses and $14 billion for other tax breaks. However, it was clear from the start that these sums would not be so lavish after the plan went through the legislative process under Republican influence.