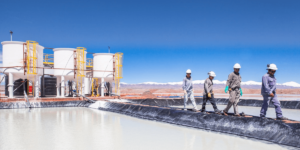 CATL takes over the Canadian mining company Millennial Lithium and pays 376.8 million Canadian dollars (about €254.5 million) for the acquisition. With the deal, the Chinese battery cell manufacturer secures a long-term supply of lithium.

The takeover of the Canadian company is only the latest example of a series of investments that CATL has made in recent times to expand its supply chain vertically. Among others, the battery manufacturer recently bought shares in Neo Lithium Corp, also a Canadian company, in the Greenland company North American Nickel and the Australian company Pilbara Minerals. A CATL subsidiary has also had a stake in China Molybdenum’s Kisanfu mine, a cobalt site in the Democratic Republic of Congo, since April.

To secure lithium supplies, CATL is turning to Latin America, among other places. Not only the newly acquired Millennial Lithium mines the raw material there, but resource material company Neo Lithium, in which CATL has held a stake of about eight per cent since the end of 2020, also holds mineral and surface rights to a newly discovered lithium and brine reservoir complex in Argentina. The lithium believed to be there is to be accessed as part of the Argentina project called 3Q (“Tres Quebradas”).

There is a lot of competition for the lithium reserves in Latin America’s “lithium triangle” between Bolivia, Argentina and Chile. At the end of 2018, for example, the Chinese company Ganfeng Lithium bought all the shares of the Chilean lithium producer SQM in the Cauchari-Olaroz project in Argentina. Since then, the Chinese company held 37.5 per cent and Canada’s Lithium Americas Corp 62.5 per cent of Cauchari-Olaroz, an 82,500-hectare mining area in northern Argentina that is tangent to two salt lakes, among other things. Ganfeng has also acquired all of Bacanora Lithium this year alone, as well as stakes in a lithium mine in Mali and a salt lake in China, according to Reuters. CATL has now stopped this “wave of acquisitions” for the time being, the report says.

But back to to Argentina: Tesla also was once in negotiations with SQM. However, this news was never confirmed. It is a fact, however, that Toyota bought into the Australian lithium producer Orocobre at the beginning of 2018 through its trading company Toyota Tsusho. Both partners founded a joint venture back in 2010 to extract lithium from the Salar de Olares salt lake in Argentina.