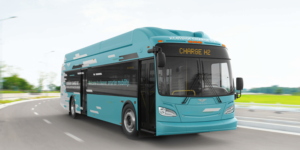 California’s Foothill Transit has ordered 20 hydrogen fuel cell buses from the NFI subsidiary New Flyer. The purchase is supported by Federal Transit Administration (FTA) funds and not the first electrification at the transport company.

Based in West Covina, California, Foothill Transit says it operates one of the largest fleets of electric buses in America, providing over 14 million trips a year in the San Gabriel and Pomona Valleys. The New Flyer hydrogen buses are, however, Foothill’s first foray into fuel cell technology.

“We were excited to be the first grid-powered battery-electric bus pioneer and have continued our zero emissions evolution with the first battery-electric Alexander Dennis double deck bus launch earlier this year,” said Doran Barnes, Chief Executive Officer, Foothill Transit. “Our path to a fully zero-emission fleet continues with the addition of NFI hydrogen fuel cell technology. We envision a future where a variety of strategies work together to allow us to achieve our zero-emission goals.”

Both ADL and New Flyer belong to NFI, previously New Flyer. The Group claims it has electric vehicles operating or on order in more than 80 cities in five countries. The manufacturer is based in Winnipeg, Manitoba, Canada.

In California, Foothill Transit now expects delivery of 20 New Flyer buses of type Xcelsior CHARGE H2. According to New Flyer, the battery-electric vehicle uses compressed hydrogen as an energy source and range extender, requiring only 6-20 minutes to refuel. Built on the company’s Xcelsior platform, New Flyer estimates the fuel-cell-electric model can save 85 to 135 tons of greenhouse gas per year from tailpipe emissions compared to a diesel bus. The given range is 350 miles.

Today’s communications did not specify a schedule for delivery or the service area for Foothill.

There have been several orders for New Flyer hydrogen buses in California, the most recent coming from GET this October. Earlier in summer this year, San Francisco Bay Area’s Alameda Contra Costa Transit District (AC Transit) ordered an additional 20 Xcelsior CHARGE H2 buses. The order was a follow on from AC Transit’s 2019 purchase of ten hydrogen and five battery-electric buses. In February last year, Orange County unveiled 10 New Flyer fuel cell buses. The county also announced what was then the largest hydrogen fueling station in the nation for public transportation.

Genoa orders e-buses from Solaris for the first time