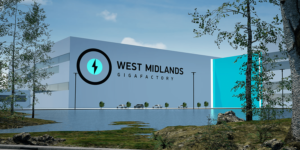 West Midlands Gigafactory, the public-private joint venture between Coventry City Council and Coventry Airport Ltd, has revealed more targets for the envisioned battery production hub. Their pitch now includes a 60-GWh output with production to start in 2025, but one issue remains.

The plans to install a Gigafactory scale battery production in the West Midlands are not new. The city, the metropolitan region and the airport had published corresponding plans earlier this year before submitting the planning application in July. At the time, the West Midlands Gigafactory joint venture was still looking for “experienced partners” and, ultimately, investors to move into the strategically located hub.

Today’s announcement suggests said search continues. “The UK’s largest battery Gigafactory continues to explore investment opportunities with battery manufacturers from around the globe,” so the initiators.

Meanwhile, West Midlands Gigafactory is not shy to bolster the pitch. The latest announcement confirms previous targets, i.e. a nearly half a million square metre site or the creation of 6,000 jobs. The JV also sticks with the envisioned start of production in 2025 and now add the ambitious capacity of 60 GWh. As a comparison, the confirmed battery factory Envision AESC is building near Nissan in Sunderland will initially have an annual capacity of six GWh. Later, capacity could be increased to between 18 and 20 GWh.

The question remains – who will build the new facility the West Midlands are hoping for? In Coventry, the joint venture boldly states that the facility would result from a £2.5bn investment (about three billion euros). Money it has yet to attract, it appears. In the announcement, Coventry City Council and Coventry Airport Ltd mention support of a “unique alliance of local governments, industrial groups, and universities.” The partner section on the website reveals academic and governmental partners indeed. However, manufacturers appear to remain missing. Only an earlier report in the Guardian newspaper had suggested InoBat Auto being considered as a partner, but this remains unconfirmed.

At the same time, the region is at the heart of Britain’s remaining automotive industry. The area around Coventry is home to several car manufacturers, including Jaguar Land Rover and Aston Martin Lagonda, BMW, and LEVC. The joint venture thus considers the battery plant a “strategically crucial investment” and an “imperative for the UK’s electrified future, especially for the automotive industry which will stop producing petrol and diesel engines from 2030.”

While the industrial investment has yet to materialise, it is well known that the UK is aiming to install battery production capacity on the Isles. The government in June appeared in talks with six manufacturers to build giga-scales factories and this week updated its Net Zero strategy. It now envisions not only the ban of ICE sales in 2030 the JV is referring to above but will likely include an EV sales quota for manufacturers from 2024, making supply an even more urgent matter.

Earlier news also reported the UK government promising up to £500 million (around €573 million) in stimulus funding for a Gigafactory in the UK. “In due course”, the initiators from the West Midlands announced at the time.

And investment may come. Currently, there is only one other concrete initiative to build a battery factory at Giga scale in the UK: Britishvolt has secured the rights to a site in Blyth near the Nissan plant in Sunderland, but also still has to secure financing to start construction.

The UK joint venture West Midlands Gigafactory is one step closer to its planned battery cell factory at Coventry Airport. The planning committees of Coventry City Council and Warwick District Council have now decided to approve outline plans for the factory. The target remains for the factory to be ready for production in 2025.

Project manager Mike Murray said: “With outline planning permission supported, the site has everything in place that future investors, likely to be drawn from the global battery industry, need for a state-of-the-art Gigafactory.” He added, “Thanks to this decision, we are now in a strong position to progress our discussions with the global automotive and energy storage industries.”