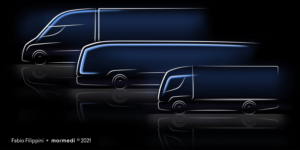 Quantron AG has announced that in future it will manufacture commercial vehicles in-house. In the first step, the specialist for trucks and buses with battery-electric and fuel cell drives wants to develop a characteristic product and brand identity.

As part of this strategy called “Quantron Vision 2025”, the company now wants to first create design-oriented recognition features. To this end, a twelve-metre bus with a new characteristic design is to be launched “in the near future”. This will be followed by a light truck and a heavy US truck, which are to receive the same visual accents. Quantron is bringing international design expertise on board to implement the plans. For example, the Augsburg-based company is supported by Italian design expert Fabio Filippini and Spanish consultancy Mormedi.

The vehicle design not only has an aesthetic function, but also a great influence on the aerodynamics and thus on the energy consumption of the vehicle, Quantron points out in a press release. According to Michael Perschke, CEO of Quantron AG, his company’s vision is to become a world-leading provider of zero-emission global transport services and products. “Therefore the unique touch and feel of the design has to be in sync with the brand DNA of QUANTRON, which stands for clean technology and zero-emission. There is no better team to give QUANTRON a global identity than Fabio Filippini and Moreno. Our ambition has to be that by 2025 latest, our sustainability focussed customers will recognize a Quantron product at first site, clean, sophisticated, high tech and representing the future of sustainable transportation.”

Meanwhile, the twelve-metre bus mentioned at the beginning is likely to be a model that Quantron had already announced a few weeks ago. According to this, it is an electric low-floor bus for public transport. The Quantron 12 will be offered in two versions: The BEV version will be available for order from the end of 2021, the FCEV version from spring 2022, and the zero-emission bus will be in a “similar price range to conventional diesel buses”, Quantron announced in September. However, the company was not more specific at this point.

Quantron says it will offer the vehicle in close cooperation with its investor and strategic partner Ev Dynamics. The European-Asian consortium only recently joined Quantron in the course of a share swap. On the occasion of the transaction, the partners announced in mid-August that they intend to jointly bring BEV and FCEV vehicles to the market. Quantron will be responsible for product development, Ev Dynamics for production.

The BEV version of the Quantron 12 will have a maximum power of 250 kW, a torque of 3,400 Nm and a maximum battery capacity of 422 kWh. Quantron states the range of the city bus at 160 to 280 kilometres (depending on the number of battery packs), the DC charging power at 80 kW. Charging via CCS takes three to six hours – also depending on the battery size, the company says. The bus can also carry up to 95 passengers.