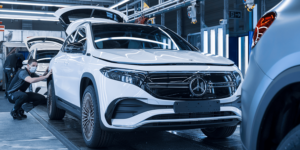 Mercedes-Benz will switch to cheaper but less powerful batteries for electric models in the lower price segment in the future in order to counteract increasing costs for some battery metals. This step was specifically announced for two models.

As CEO Ola Källenius explained in an interview, lithium iron phosphate battery cells will be used for the next generation of models such as the EQA and EQB from 2024. For these series, which operate in a significantly more price-sensitive segment than the flagship sedan EQS, for example, the use of expensive battery materials such as nickel is to be avoided.

According to the report, Källenius is betting that consumers will accept shorter ranges in the cheaper models. “We think there will be a lot of urban-oriented customers that don’t need the E63 AMG,” Källenius said, referring to the internal combustion model with a V8 engine from performance subsidiary AMG. “For those entry-level positions, in the future, we’re looking at lithium-iron-phosphate batteries.”

Källenius doesn’t say it, but the logic behind it is clear: with nickel-based cell chemistries – whether NCM, NCA or NMx – Daimler assumes that it will no longer be possible to keep prices for the electric compact series at today’s levels.

Both the EQA and the EQB rely on a 66.5 kWh battery in the variants presented so far – with nickel-based cells. An order of magnitude in which an LFP battery would operate does not emerge from the report. Mercedes had announced from the outset that it would offer further battery options in the EQA and EQB – but so far there has been more speculation about a larger long-range battery.

Daimler CEO Källenius did not specify in the interview which supplier Mercedes-Benz relies on for the LFP batteries. Bloomberg assumes, however, that it will be CATL, among others. The Chinese cell manufacturer already supplies nickel-based cells for the EQS. According to the supply agreement signed in August 2020, Daimler also intends to use the cell-to-pack (CTP) technology developed by CATL for “individual projects”.

With CTP technology, the cells are integrated directly into the battery pack, eliminating the intermediate step via conventional modules. This would allow some of the energy density to be recovered, at least at the pack level, that is lost by switching from more energy-dense NMC cells to LFP cells.

Tesla is already using LFP cells from CATL on a large scale. Only last week, at the presentation of the financial figures for the third quarter, Elon Musk confirmed that in future all ‘Standard Range’ models would be equipped with LFP cells – until now this was only the case for Teslas built in China. Tesla is also apparently looking for a second LFP supplier: Rumours had recently intensified that the electric car maker had placed a first order with BYD.

Lithium iron phosphate cells were ignored by many carmakers for a long time because of their lower energy density – they were mostly concerned with being able to store as much energy as possible in the available installation space. Due to the price increases for materials such as nickel and manganese, but also due to the increasingly dense charging network, the cheaper and more robust LFP cells are coming back into focus. Volkswagen, too, will probably rely on LFP cells for the upcoming ‘MEB Entry’ models.

Under Källenius, Daimler has tightened its EV production targets, and by the end of the decade only pure electric cars are to be sold in most markets. In July, the Stuttgart company announced its intention to set up eight gigafactories for cell production worldwide together with partners. At the end of September, it was announced that Daimler would buy 33 per cent of ACC, a battery joint venture previously held by Stellantis and the energy group Total.

Ein Kommentar zu “Daimler to use LFP cells from 2024”