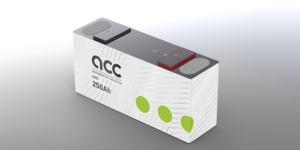 Mercedes-Benz acquires a stake in the European battery cell manufacturer Automotive Cells Company (ACC). The German car manufacturer becomes an equal shareholder together with Stellantis and Total. In the course of this announcement, the car manufacturer also gives further details of its battery strategy.

ACC was founded a year ago by the French car company PSA with its German subsidiary Opel (now both Stellantis) and the French energy company Total with its subsidiary Saft. With the participation of Mercedes-Benz, all three sides will hold 33 per cent of the shares in the future, and the German carmaker will also receive two of the total of six seats on ACC’s supervisory board. Mercedes expects the first cells and modules from ACC for its own use from the middle of the decade. With the Stuttgart-based company’s entry, the partners are simultaneously raising the targets of the future battery cell and module manufacturer. Instead of 48 GWh output, the aim is now to achieve “capacities of at least 120 gigawatt-hours in Europe by the end of the decade”. Against this backdrop, ACC is said to be looking into expanding its production network to include further locations in Europe.

Brief review: In 2020, Total and the current multi-divisional group Stellantis agreed on the creation of ACC. While Total and Saft agreed to contribute their know-how in research and development and industrialisation, PSA and Opel threw in their knowledge of the automotive market and experience in production. A research and development centre in Bordeaux (France) has since been put into operation. A pilot site in Nersac, France, will start production at the end of this year.

At the end of the R&D phase, it is planned to date to start mass production in two ‘gigafactories’ in Douvrin (France) and Kaiserslautern (Germany). There, a capacity of 8 GWh is to be achieved initially and 48 GWh by 2030. At least, that was the plan so far. In view of the required planning lead time, the new capacity expansion is more likely to be achieved through the construction of additional factories than through the expansion of the plants already planned. However, this has not been officially confirmed.

On its previously known scale, with Douvrin and Kaiserslautern as production sites, the project benefits from the financial support of the French and German authorities to the tune of 1.3 billion euros. It has also been approved by the European institutions as an IPCEI project. While at the time of its foundation a year ago there was talk of a total investment in ACC of “more than 5 billion euros”, this amount has increased to “more than seven billion euros” due to the entry of Mercedes and the associated expansion plans. According to a statement by the Stuttgart-based carmaker, this is to be raised through a combination of equity, debt capital and public funding.

Mercedes-Benz itself plans to invest a mid three-digit million euro amount in the coming year and further sums in the years to come. In total, however, the investments are to remain “below one billion euros”. The transaction is still subject to the usual closing conditions and regulatory approvals.

Mercedes had already outlined its updated electric and battery strategy at an investor day in July. The key points: Mercedes wants to become purely electric by 2030 “wherever market conditions permit” and present three new pure E-platforms in 2025. In addition, the drive technologies are to be sourced and the value creation of the required batteries is to be entered into. Daimler puts the global demand at more than 200 GWh. Against this background, the Stuttgart-based company announced in July that it would set up eight gigafactories for cell production worldwide together with partners. The first partner, ACC, has now been officially announced. Mercedes also specified that four of the eight cell factories are to be built in Europe.

There were media reports at the end of July that one of these plants planned for Europe was to be built in Kölleda in Thuringia – in or near the Daimler engine plant there. According to the parties involved, Kölleda is the chosen location, but the partner is still unclear, the report said. Daimler’s current supplier CATL is building its European plant in Erfurt, not far away, to produce cells for BMW, for example. So a partnership with the Chinese or with ACC would seem obvious.

One way or another. The Stuttgart company is also planning a kind of “unit cell”, but probably won’t go as far as the VW Group. “The next battery generation will be highly standardised and suitable for use in more than 90% of all future Mercedes-Benz passenger cars and vans. At the same time, it will be very flexible in order to offer individual solutions to all Mercedes-Benz customers,” Mercedes announced in July. Now there are further details. The basis will be a modular, highly standardised battery kit, which will allow the integration of battery cells and modules from different development partners through uniformly designed components and interfaces. In the current announcement, the company states that in the course of the partnership with Stellantis and Saft, “differentiating variations in the modular system are optimally represented by cell chemistry and cell height”. In addition, the company is researching further technological leaps, for example with regard to high-silicon anode and solid-state batteries.

The Stuttgart-based carmaker specifically wants to enrich the joint venture with its technology and production know-how as well as support the expansion of ACC’s production network with its quality standards. The group says it will also “complement the high-end cell development with the newly planned pilot plant ‘Mercedes-Benz Drive-Systems Campus’ in Stuttgart from 2023 onwards”. Mercedes-Benz is known to have been pursuing research and development activities in the field of battery technology for years, but is now becoming active in large-scale production for the first time.

“Mercedes-Benz pursues a very ambitious transformation plan and this investment marks a strategic milestone on our path to CO2 neutrality. Together with ACC, we will develop and efficiently produce battery cells and modules in Europe – tailor-made to the specific Mercedes-Benz requirements,” stated Ola Källenius, Chairman of the Board of Management of Daimler AG and Mercedes-Benz AG. “This new partnership allows us to secure supply, to take advantage of economies of scale, and to provide our customers with superior battery technology. On top of that we can help to ensure that Europe remains at the heart of the auto industry – even in an electric era.”

Yann Vincent, CEO of ACC, describes the entry of Mercedes-Benz as a new shareholder as an important milestone for ACC. “Mercedes-Benz will bring a vote of confidence in our technology roadmap and product competitiveness that significantly strengthens ACC’s business potential and underpins our ambitious growth plans. This is our contribution to an electric and sustainable future.” ACC’s goal, he said, is to become the European market leader for battery cells and modules.

The announcement is also drawing applause from German politicians. The Federal Minister of Economics, Peter Altmaier, commented on Mercedes’ entry as follows: “It can already be foreseen that several tens of thousands of jobs will be created in battery cell production in Germany alone in the next few years. The cooperation between Germany and France has the potential to create a new battery champion in Europe. Together with Tesla’s project and the 14 other projects that we are funding as part of the European battery projects, Germany can become a focal point of global battery production. This will create the most successful industrial policy project to date since Airbus.”