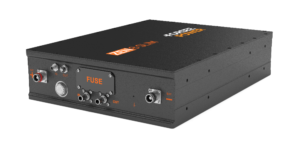 Forsee Power is introducing a new range of particularly thin batteries for use in electric vehicles for the construction and agricultural sectors as well as in light electric vehicles. The French battery manufacturer puts the width of the batteries at just 128 millimetres.

At the beginning of the year, Forsee Power had already announced the introduction of a new generation of particularly thin battery modules. The batteries of the Slim series are to cover capacities from 5 to 21 kWh, voltages from 50 V to 120 V and a charging current of 106 A, it was said at the time. The French company also named a first customer, bus manufacturer Wrightbus.

Now Forsee is presenting a battery from this Zen Slim series especially for off-road applications and light electric vehicles. The 128 mm thin batteries with NMC lithium-ion cells of the new Zen 8 Slim series “are designed to electrify vehicles with very limited space without changing the space for the driver or passengers” and are offered by the French manufacturer in the form of modules and packs with an integrated battery management system.

The biggest challenge in electrifying off-highway vehicles in sectors such as construction, agriculture and industry is integrating the batteries into a vehicle designed to accommodate a thermal powertrain, Forsee said in a statement. The available space is usually limited. This is where the particularly flat batteries should show their strength.

According to Forsee Power, the new range offers a high degree of modularity and scalability, allowing the installation of 16 modules in series and six branches in parallel, enabling a wide range of combinations from 8 kWh and 48 volts to 760 kWh and 800 volts. In addition, the Zen 8 Slim batteries are said to have an energy density of 251 Wh/l, a lifespan of up to 5,000 cycles and are “very robust, air and water tight”. Regarding charging performance, Forsee states that the batteries “can be charged to 100% in just one hour”.

With a view to the new series, Forsee says that more than ten projects are currently being “investigated with major European and Asian OEMs”. The Zen 8 Slim battery systems for the European market will be manufactured in Chasseneuil-du-Poitou in France and for the Asian market in Zhongshan in China.