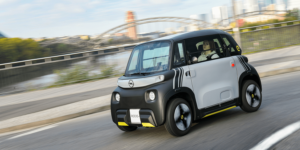 The Opel Rocks-e is now available to order in Germany at list prices starting at 7,990 euros. Opel says the monthly financing rate for the City EV will be the same as a ticket for local public transport. Delivered to dealers will begin before the end of the year.

Opel had introduced the Rocks-e at the end of August as its own offshoot of the Citroën Ami electric two-seater light vehicle. Basically, the vehicles are identical: the dimensions and technical data are the same, the design is similar except for a few details. The mini vehicle is intended to score points as a city electric vehicle for pure use in urban environments. The basic version price starts from 7,990 euros. The Klub and TeKno versions start at 8,790 euros each. There are no state subsidies for the purchase of light electric vehicles, although politicians are said to be considering subsidies for light electric vehicles.

The new Opel Rocks-e can be ordered online in Germany with immediate effect. Selected Opel partners offer product advice, test drives and support for the online ordering process. The first vehicles are to be delivered to dealers before the end of the year – i.e. in the next two months. When the vehicle will become available beyond its native market is still unclear, but expected. By comparison, in France, the Ami costs 6,000 euros after deducting a subsidy of 900 euros, so it is even more affordable than the Rocks-e in Germany.

We presented the data on the technology, structure and appearance of the Rocks-e, which Opel calls SUM (“Sustainable Urban Mobility”), in detail in the earlier article linked above. Of course, it is important to note that Opel, like its French sister brand with the Ami, is aiming this model primarily at young people aged 15 and over. This is because the light vehicle can already be driven with an AM driving licence (keyword: scooter driving licence). The decisive factor is that the Rocks-e has no more than 6 kW of power, no more than two seats and does not go more than 45 km/h. This means that 15-year-olds throughout Germany can already drive it. The fact that 15-year-olds are already allowed to get behind the wheel nationwide is due to an amendment to the law that came into force this year. Previously, young people had to be 16 years old in certain federal states.

In the basic version, available for 7,990 euros, Opel says the Mini vehicle already offers the maximum achievable range of up to 75 kilometres according to WLTP. The Opel Rocks-e Klub and Opel Rocks-e TeKno equipment lines, available from 8,790 euros, bring “even more colour into play” with additional features, according to the Rüsselsheim-based German company. The main difference is in the design. Opel mentions, for example, wheel trims in x-design, vertically running black trim stripes on the driver and passenger side, trim on the front and rear apron in grey (in the Klub trim) or yellow (TeKno) and correspondingly coloured storage nets, bag hooks and inserts in the instrument and centre console. Also standard on Klub and TeKno: a smartphone holder and DAT connectivity; optional is a Bluetooth hands-free kit.

“With the opening of the order books for our new Opel Rocks-e we make the transition to electric mobility simple and affordable for everyone, from urban commuters to novice drivers,” says Opel Germany CEO Andreas Marx. “No superfluous extras, the Rocks-e is pure emissions-free mobility. With bold and pure design, extremely compact dimensions and an appearance that is both functional and unconventional.”