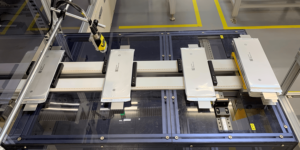 SK On, the battery division of the South Korean company SK Innovation, which was spun off at the beginning of October, is apparently planning its fourth and so far largest production facility for electric car batteries in China. According to an agency report, the new plant will not be part of a joint venture, but will be operated independently.

As the South Korean news agency Yonhap reports with reference to industry circles, SK On wants to invest the equivalent of 2.2 billion euros in the new factory in the city of Yancheng. SK On recently signed a contract with the city of Yancheng – located in the province of Jiangsu in the north-east of the country – according to the sources. However, the company has not yet confirmed the deal.

According to Yonhap, the factory will have an annual production capacity of 10 GWh, which would make the new plant in Yancheng SK On’s largest battery factory in China to date. Construction is scheduled to begin in early 2022.

The plans for Yancheng do not come as a surprise: At the beginning of September, SK had announced that it wanted to build another battery cell production plant in China – but without naming the location and the production capacity. At that time, however, there was only talk of investment in the neighbourhood of 900 million euros.

SK On has three factories for electric car batteries in China so far – specifically in Huizhou in the central Chinese province of Guangdong, Changzhou and another plant in Yancheng, both in Jiangsu province. The three plants have a combined annual production capacity of 27 GWh. The plants in Huizhou (together with Beijing Automobile Works) and Changzhou (with EVE Energy) are both joint ventures. The new plant in Yancheng will be operated solely by SK On, according to one of the sources.

SK Innovation is currently the sixth-largest battery cell manufacturer and currently has around 40 GWh of production capacity with plants in South Korea, China, the USA and Hungary. By 2023, the capacity is to increase to 85 GWh, and by 2025 to 200 GWh. By 2030, SK Innovation wants to be able to produce 500 GWh.

SK On said last week that it has an order backlog of about 1.6 terawatt hours (TWh) of batteries worth about 220 trillion won (about 160 billion euros), which could power about 23 million electric vehicles. This appears to have added some large orders: In July (when the spin-off of the battery division was announced), it was still said that they had orders worth 130 trillion won for 14 million electric cars.

Korean battery cell manufacturer SK Innovation has officially begun construction of its fourth China plant, according to the Yancheng city government. The factory in the city of Yancheng in Jiangsu province is to be the first SK plant in China to be operated independently.

The annual production capacity is given as 30 GWh – and not 10 GWh as mentioned above. This would make the Yancheng factory not only SK On’s largest battery plant in China, but also the company’s largest worldwide.

The main part is to be completed as early as December 2022. The construction of the production facilities is then to begin in January 2023.

Manz to set up battery production lines for BMW