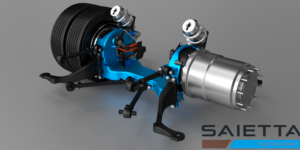 According to the Saietta Group, the acquisition is intended to drive its own growth strategy – thanks to e-Traction’s “commercial and technical capabilities” and its “established production facility” for power electronics. The purchase price, however, is not mentioned in the announcement.

Hopes at the British company are apparently high: “This acquisition will allow Saietta to accelerate its business plan by several years, adding not just commercial and technical capability but also extending our IP portfolio and acquiring an operational power electronics production facility,” says Saietta CEO Wicher Kist. “The entire team at e-Traction has over 10 years of successful experience in the design, manufacture, sale and supply of complete e-axle and electric drivetrain systems with millions of kilometres of real-world in-service road miles and established power electronics competence and manufacturing capability.”

Saietta plans to take on all of e-Traction’s employees and also retain its site in Apeldoorn, the Netherlands. e-Traction CEO Steven Hsieh will also stay on board and will be responsible for the Asian business as Saietta board member. Hsieh himself is not mentioned in the announcement by the new owner. But e-Traction CFO Edgar Ooijman is quoted as saying: “I’m excited to connect our high level of experience in e-axle and high voltage components to the strategy of Saietta. It’s a good fit and will boost our combined presence in multiple market segments.”

Chinese real estate conglomerate Evergrande Group had famously built up its electric car division Evergrande New Energy Vehicle (often referred to as Evergrande Auto) over the last couple of years with a lot of money and numerous acquisitions. At the beginning of 2019, Evergrande had joined Saab’s successor company NEVS (National Electric Vehicle Sweden) as the main owner. e-Traction was named as the supplier for the e-drives – until Evergrande also took over the Dutch company.

Since the real estate giant is now known to have run into financial difficulties, some shareholdings and subsidiaries are now apparently being sold off. About a week and a half ago, the sale of Protean Electric, a wheel motor specialist belonging to NEVS, was announced – Protean is going to the British supplier Bedeo. However, Evergrande wants to hold on to the electric car division and even expand the business.