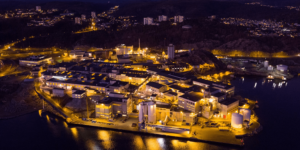 After an agreement in principle between Freyr and the raw materials trader Glencore at the beginning of the year, a first concrete contract now follows: It fixes the delivery of up to 1,500 tonnes of cathode material with partially recycled cobalt from Glencore’s Nikkelverk plant in Norway.

Freyr and Glencore had agreed in principle in February to supply up to 3,700 tonnes of cobalt-based cathode material. The raw material would have to be procured sustainably according to standards yet to be specified and would be processed into said components at Nikkelverk, Glencore’s Norwegian plant in the city of Kristiansand, they said at the time. Now the delivery of the first tranche of up to 1,500 tonnes has been agreed. The terms of the time frame and prices remain under wraps.

Freyr only specifies that the agreement aims to “supply our production facilities with recycled, sustainably sourced and traceable cobalt that will be refined in Glencore’s Norwegian operations as part of a growing local sustainable battery value chain.” The next logical step, he said, is to work together towards 100 per cent decarbonisation of the supply of cobalt and other battery materials – mind you, potentially factoring in a carbon offset programme.

Freyr and Glencore also agree to work together on the introduction of recycling certificates. The aim is to document the supply of recycled material. The partners are also discussing further cooperation opportunities “in Norway and worldwide” – among other things with regard to potential nickel supplies and potential supplies of recycled scrap from Freyr’s future battery cell plant in Mo i Rana, Norway, to Glencore.

For the planned factory for the serial production of battery cells, which was first announced in 2019, Freyr recently named a new capacity again. Originally planned for 32 GWh, the plant is now to have capacity for 35 GWh by 2025. In the meantime, there was talk of 40 or even 43 GWh.

However, the latter figure could soon be true – at least for the whole of Norway. Freyr wants to build up another 8 GWh of production capacity through joint ventures in Norway – which, together with the 35 GWh from its own factory in Rana, would add up to 43 GWh. After 2025, the Finnish plans should also be included in the calculation: Freyr is already aiming for a total capacity of up to 83 GWh in Europe by 2028.

Meanwhile, the ties with Glencore are not only being strengthened through supply agreements. The commodities group has also invested in Freyr as part of its IPO through a PIPE. The size of the investment earlier this year is not known, however. The start-up’s US IPO was done through a merger with shell company Alussa Energy Acquisition Corporation.