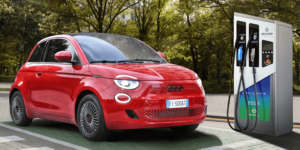 After Stellantis announced the construction of a European charging network with AC and DC chargers a few weeks ago, the car company has now revealed some details about the DC chargers. Under the project name Atlante, the first DC station is already being built in Italy.

In October this year, Stellantis revealed that its entire charging network with AC and DC charging points is to comprise more than 15,000 locations with a total of two million spaces by 2025. Of these, however, a large number will be AC charging points, the classic destination charging.

Stellantis has now revealed that the first DC chargers are being set up in Italy, France, Spain and Portugal in cooperation with NHOA and Free2Move eSolutions under the project name Atlante. Construction work is already underway for the first station in Piedmont and the pace is expected to remain high thereafter: According to the report, the first 700 project sites have been identified, ten per cent of which (mainly in Italy) are already under development and will be operational within the next six months.

The power at the Atlante charging stations is to be between 100 and 175 kW. A specific type of charging station has not been mentioned, but Stellantis has confirmed the target of 5,000 fast charging points in total by 2025 and more than 35,000 by 2030, all of which will be fully integrated into the electricity grid and powered by energy from renewable sources and storage systems. NHOA is contributing the storage to the partnership, while the charging stations (hardware and software) are provided by Free2Move eSolutions, a joint venture between NHOA and Stellantis.

The partners had planned the Atlante project in response to the EU Commission’s Fit for 55 plans that stipulate the EU target allowing only zero-emission new cars from 2035. To achieve this, Stellantis and NHOA want to set up charging stations every 60 kilometres along main traffic arteries in the countries mentioned. However, Atlante is not only focusing on the construction and operation of the charging stations but also on the integration of the fast-charging systems into the energy grid by means of the aforementioned storage facilities. Depending on the location, roofs with solar panels and energy storage systems with second-life batteries will also be installed.

“Fast charging installations in Southern Europe represent a great opportunity for growth and development towards a new mobility,” says Anne-Lise Richard, Head of Global e-Mobility at Stellantis. “The deployment of public charging infrastructure is key to helping customers choose to drive an electric vehicle.”