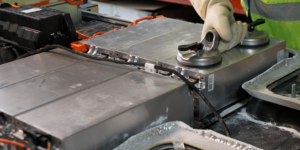 Stena Recycling has started construction of its new battery recycling plant in Halmstad, announced in July. The site is located between Gothenburg and Malmö. The Swedish company aims to have the plant up and running in the first quarter of 2023.

The construction plans were revealed this summer. However, Stena has not yet given any information on the schedule and capacity of the proposed factory. The company is now making up for this: Construction will start “in early autumn”. At the end of the first construction phase in Q1/2023, the plant will have an annual capacity of 10,000 tonnes and will recycle not only batteries from electric cars but also from electrical appliances.

In parallel, Stena Recycling is investing in an infrastructure for the collection and sorting of batteries to be sent to the Halmstad plant. Corresponding battery centres have already been built in Sweden, Poland and Germany. Others are to follow in Denmark, Finland, Norway and Italy. The aim is to collect batteries from all over Europe for the Halmstad plant.

“We are currently defining the technology we will use in the different stages of the recycling process,” Fredrik Pettersson, managing director of Stena Recycling in Sweden, elaborates. “As we are early adopters of this type of facility, it is exciting that we are breaking new ground and setting the standard in battery recycling.”

It was already noticeable in the announcement from July that Stena published hardly any details about the planned recycling process. At that time, it was only stated that 95 per cent of a lithium-ion battery could be recycled with the process. With such a high recycling rate, it is likely to be a hydrometallurgical process. In this process, the individual raw materials are extracted from the crushed battery material with water and chemicals. With so-called pyrometallurgical processes – in other words, melting down the battery – recycling rates of over 90 per cent are usually not possible.

Stena is broadly positioned as a recycling company. Battery recycling is only one mainstay – albeit a steadily growing one. “Battery recycling is a fast-growing challenge in society and there is stricter legislation coming from the EU. In a few years this is likely to be a significant part of our business. With our size, infrastructure, customer base and expertise, we have all the prerequisites to become one of Europe’s leading players in battery recycling so that the materials in used batteries can become circular raw materials for the production of new ones,” says Kristofer Sundsgård, CEO and responsible for Stena Recycling’s operations in seven European countries.

Through the reported cooperation with Johnson Matthey, the recycled material will be turned into refined material in a further process step that can be used in new batteries. However, Johnson Matthey surprisingly announced this month that it was withdrawing from the business with battery materials for the automotive industry, but stated that it wanted to continue to operate in the area of circular economy. In this respect, it remains unclear whether the partnership with Stena Recycling announced in spring is affected or not – especially since the Swedish company do not address this issue in their current announcement.

Stena Recycling is receiving 70.7 million kronor (the equivalent of just under 6.8 million euros) from the Swedish Energy Agency for its new battery recycling plant in Halmstad. The plant, construction of which has already begun, is scheduled to go into operation in the first quarter of 2023 and will initially process around 10,000 tonnes of batteries per year, including those from electric cars.

SK On launches its own battery diagnosis service