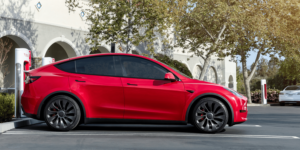 In Norway, 11,274 new electric cars were registered in November. Electric cars thus reached a share of 73.8 per cent of all passenger car registrations in the month. In addition, there were 2,653 new plug-in hybrids. The most popular model was the Tesla Model Y with 1,013 registrations.

The more than 11,000 new registrations in November bring the figure for the current year close to 100,000 vehicles. From the beginning of January to the end of November, 99,948 pure electric cars were newly registered in Norway, according to the Norwegian Road Information Authority (OFV). This corresponds to a market share of 64.2 per cent in the current year. This figure refers to purely battery-electric cars; hybrid vehicles are not counted here.

In addition to the 11,274 electric cars, there were 2,653 plug-in hybrids in November with a market share of 17.4 per cent. In total, 91.2 per cent of all new passenger cars in Norway had an external charging connection in November – exactly the same level as in September with the Tesla boost; in October, the figure had fallen back to just under 90 per cent. By comparison, petrol-only cars had a market share of 2.3 per cent and diesel-only cars 2.7 per cent. In October, pure combustion engines were still able to record a slight increase, but in November their market share fell back to the now almost usual level.

The model ranking in November – although it is not yet the last month of the quarter – is led by two Tesla models. The Model Y came to 1,013 new registrations, the Model 3 to 771. Close behind is the VW ID.4, of which 725 were newly registered in Norway in November.

The ID.4’s sister model, the Audi Q4 e-tron, is in fourth place if the Sportback is included. The OFV statistics list both variants with 661 new registrations. The portal EU EVs provides a more detailed breakdown: According to this, there were 448 Q4 e-tron and 201 Q4 e-tron Sportback. Note: The figures sometimes deviate slightly from the OFV statistics and may change at the beginning of the following month when registrations are subsequently reported. At least for the Tesla models, the deviation this month is just one vehicle.

The Nissan Leaf follows behind the Audi SUV with 655 new registrations, ahead of the Polestar 2 with 502 vehicles. The Polestar in particular is above the usual level, possibly because the cheaper single-engine models are already paying off here. Behind them follows a whole series of electric SUVs, starting with the Ford Mustang Mach-E (491 vehicles) and the Skoda Enyaq (488 vehicles) and ending with the Hyundai Ioniq 5 with 475 new registrations.

Until the Enyaq, these were not only the most registered electric vehicle models, but registrations across all drive types. Just ahead of the Ioniq 5, the Toyota RAV4 is the first non-electric car in the list. Also worth mentioning are the Porsche Taycan (417 registrations) and the BYD Tang, which had 398 new registrations.

VW rumoured to be building electric convertible in Osnabrück