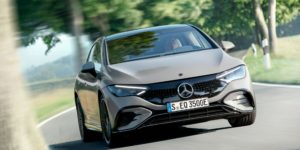 Daimler has completed a new battery production line as part of its Chinese joint venture Beijing Benz with BAIC. The battery packs produced there will in future be used in the Mercedes-Benz EQE for the Chinese market.

The EQE produced in China, the European examples are to be built in Bremen, is scheduled to be launched there in 2022. The electric saloon based on the EVA2 platform was presented at the IAA in September.

As Beijing Benz now announced via its WeChat account, the battery production line was already completed on 3 December and has already completed its first test run. Initially, the batteries assembled there will be used exclusively in the EQE. However, since the line is automated and flexible, mixed production of different battery products is also possible, the company said.

In this way, Beijing Benz not only wants to be able to adapt the production capacity of different batteries to market demand, but also to build further EQ models in China on this basis. Daimler sources the battery cells from its Chinese suppliers CATL and Farasis Energy.

As reported, the EQE built locally for China could come onto the market there not only as a sedan and SUV, but in future also as a cross between these two body styles. However, a decision on the EQE SUS (Sports Utility Sedan) has probably not yet been made.

Beijing Benz has already been building the EQC since 2019. Since October, the smaller EQA and EQB electric SUVs have also been available for pre-order in China – the EQB was even unveiled in China at the Shanghai auto show in April. Despite its strong position in the Chinese internal combustion market, Mercedes-Benz has so far performed weakly in electric car sales – the brand did not make it into the top 15 of the China Passenger Car Association’s monthly figures. Mercedes does not publish its own monthly figures for China.