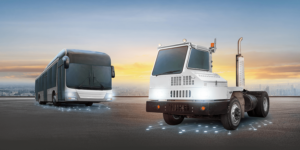 US vehicle supplier Meritor announced its 14Xe ePowertrain is now available and will be in production this month. A number of first customers for the new electric drive system have already been found. Additionally, a collaboration has been signed with BAE Systems.

First, to the actual 14Xe ePowertrain, which has just begun serial production. Meritor describes the system as a “fully integrated, all-electric drive system and is the only integrated electric powertrain in production for Class 8 trucks in North America.” Production of the 14Xe ePowertrain takes place at Meritor’s manufacturing facility in Asheville, North Carolina.

The powertrain itself is based on Meritor’s 14X axle housing, “which maintains existing axle mounting hardware for ease of OEM integration”. The modular design also allows for the interchangeability of key components, such as electric motors, transmissions, gearing, brakes, wheel ends and housings, allowing for flexible adaption to customer specifications. This includes “various powertrain needs based on vehicle application and duty cycle spanning Class 5-8 commercial vehicles”.

Thomas Built Buses has already issued the first supply order for the drive system, planning to use the ePowertrain “for the next generation all-electric Saf-T-Liner C2 Jouley school bus”. The US American Daimler subsidiary signed an agreement spanning over a period of five years, which is expected to start in January 2024. Exactly how many vehicles are to be built is not clear, however, the flexibility of the system was praised by TBB representatives: “The versatility and robustness of the integrated 14Xe ePowertrain is a great complement to the next-gen, all-electric Jouley from Thomas Built,” said Kendra Eads, vice president of engineering and technology, TBB. “We look forward to working closely with our colleagues at Meritor on integration of the 14Xe and delivering even greater efficiencies for school districts across the country.”

TBB is not the only customer, however, as Meritor will supply its 14Xe ePowertrains to Hexagon Purus for a “near-term development program with the intention of taking the program to production”. Here, Meritor’s ePowertrain will be used to power two different hydrogen fuel-cell electric vehicle applications in North America, including a Class 8 drayage truck and yard hauler.

Finally, Meritor found an entirely different application for their emissions-free technology, and will collaborate with BAE Systems for the Industrial and Defense markets. In this cooperation, BAE Systems will leverage its expertise in systems integration and power electronics to combine its power management system with Meritor’s ePowertrain. The integrated solution will increase options for multiple applications and conditions in a wide range of industrial markets, however how the applications are to be used in the Defense market was not separately explained.