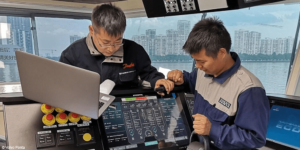 Volvo Penta and Danfoss’ Editron division announced they have signed a partnership agreement “to take the marine sector’s electromobility development to the next level.” The deal will see the companies work together in R&D and right through to installation, commissioning, and aftermarket support.

“We’re excited to join forces with Volvo Penta officially,” said Kimmo Rauma, vice president of Danfoss’ Editron division. “Ultimately, we want to create a sustainable solution and find the ideal fit for the market,” he added.

Neither company is a stranger to the marine market. Editron’s Marine Business Unit delivers electric systems to ferries, workboats, and superyachts.

Volvo Penta also acts as the marine division of commercial vehicle group Volvo Group, among other things. In addition, the company in June had acquired a majority stake in ZEM AS, a Norwegian supplier of batteries for electric boats as reported.

Earlier projects reportedly included adding an electric drive for port operations to a sailing yacht in 2019, and converting a diesel ferry to electric earlier that same year.

The latter is closer to Danfoss’ recent advances in marine applications since the company helped heavier workboats switch to zero-emissions, specifically in South Korea and Thailand.

What is more, Danfoss Editron and Volvo Penta have cooperated before. For example, they list one of the UK’s first hybrid crew transfer vessels for long-term Danish customer MHO-Co and windfarm operator Ørsted, as well as a fleet of commercial autonomous exploration vessels for a marine robotics company, Ocean Infinity among the joined projects. (The latter only saw Volvo supplying diesel generators, though.)

Commenting on the reinforced partnership, Peter Granqvist, Chief Technology Officer, Volvo Penta, said this would make the company a true system integrator. “Volvo Penta has an integrated helm to prop, full systems approach, combined with a strong service network. By adding Danfoss’ expertise and strength in electrification, we will deliver a unique offer in the market.”

“We want to drive sustainability across the industries we operate in,” added Rauma. “Combining our market-leading unique products with Volvo Penta’s state-of-the-art power and propulsion systems will help achieve this goal. This agreement will set a new industry standard in electric marine propulsion solutions for the marine sector and enable us to increase our presence in the market even further.”

Zero-emission marine applications have enjoyed increased focus over the past few months since the European Parliament voted for the inclusion of CO2 emissions from maritime shipping in the EU Emissions Trading Scheme to decarbonise naval transport in September 2020.