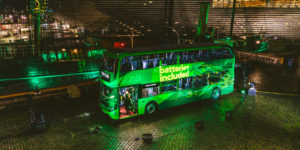 The manufacturer alliance Alexander Dennis Limited and BYD has delivered twelve battery-electric double-deckers to the Scottish city of Dundee. Bus operator Xplore Dundee which belongs to the McGill’s Group will use the Enviro400EV buses on route 28, serving Dundee’s Lochee Road, which is the fourth most polluted street in Scotland.

AD-BYD, in a statement, stressed these were the first electric buses in Xplore Dundee’s public transport fleet. However, the city itself is already very active in e-mobility, with 150 e-vehicles in its municipal fleet.

The company behind Xplore Dundee – McGill’s acquired it from National Express in December – has also been advancing electric transport. The double-decker order was placed in February of this year, alongside orders for smaller electric buses from Yutong.

Ralph Roberts, Chief Executive of McGill’s Group, at the time said he expected the Group to “operate more electric buses than any other operator in Scotland” at the end of 2021.

Back to the double-deckers – these were built at ADL’s Falkirk plant in Scotland. As usual, BYD contributed the drives and batteries. The vehicles are each 10.8 meters long, and the manufacturer alliance puts their range at up to 160 miles, the equivalent of around 257 kilometres.

McGill’s has received funding through the Scottish Ultra-Low Emission Bus Scheme (SUBLEBS). In March, the Government in Scotland had awarded £40.5 million through a second round of the scheme to help replace 215 diesel buses with battery-electric models as reported.

The decarbonisation of public transport is also being actively promoted by the British government. As part of a major restructuring of public bus services, it promised in March to put 4,000 new battery and hydrogen-powered buses on the road.