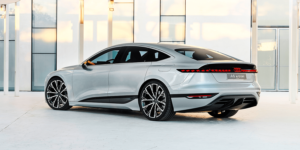 In Germany, Audi’s main plant in Ingolstadt will only produce electric cars from 2028. This means that the electric A6 successor will probably be built at the main plant rather than in Neckarsulm.

These plans are quite ambitious seeing as the Ingolstadt plant hasn’t produced a single electric model to date. Within just three years, half of all vehicles built in Ingolstadt should be fully electric, and “from 2028, only electric cars will then roll off the production line in Ingolstadt,” an Audi spokesperson told Der Spiegel.

The first model to be produced in Ingolstadt will be the Q6 e-tron. The Audi spokesperson said the first pre-production units are already being built and series production is planned for 2023. The Q6 e-tron is based on the new PPE electric platform, on which Porsche will also introduce the electric Macan successor in parallel.

“Then comes the electric successor to the A6, the E6,” the spokesperson continued. This comes as a surprise since the A6 -currently in the C8 generation- is manufactured at Audi’s Neckarsulm plant. Until now it had therefore been assumed that the electric version would also come off the production line there. Production in Ingolstadt does make sense seeing as the production lines for the Q6 e-tron are already being converted for the PPE at the main plant. These could also be used by the E6, which is likely to be based on the A6 e-tron concept shown in China – apart from the A6 model designation, the model has little in common with the internal combustion models built in Neckarsulm.

Audi’s other revelations are less surprising than the news on the E6: “By 2029, the electric successors to the current A3 and A4 combustion engines produced in Ingolstadt will follow,” said Peter Mosch, head of Audi’s Works Council, but did not specify on which platform these electric versions will be based.

Audi sharpened its electric focus in June 2021, announcing that from 2026 it would launch new models only with pure electric drive and gradually phase out production of internal combustion engines by 2033 – with the exception of the Chinese market.

While Audi’s Brussels plant is already all-electric – the e-tron quattro has been built there since 2018 and production of the Q8 e-tron PPE SUV has been confirmed – Ingolstadt would follow suit. No such concrete plans have yet been published for Neckarsulm, but in view of Audi’s plans, this should follow soon. The spokesperson said that by the middle of the decade, “Neckarsulm will also successively be home to purely electric models.” This should then also include the second generation of the E6.