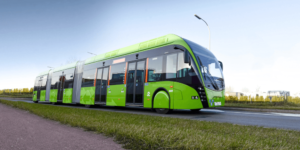 The Nordic public transport operator Nobina has ordered 21 battery-electric double-articulated tram buses of the type Exqui.City in the 24-metre version from the Belgian manufacturer Van Hool. These will be used in the public transport system of the Swedish city of Malmö from mid-2022.

The electric tram buses are plug-in vehicles that will be charged at the Nobina depot in Malmö. Van Hool says that the Exqui.City model, which comes in 18 and 24-metre versions combine the flexibility of a bus with the efficiency of a tram.

The bus-maker has designed these tram-buses with what they call a “distinct futuristic design”, saying that a high level of comfort is afforded with air conditioning, low noise levels and soft lighting. The bus-tram design is supposed to offer optimal accessibility with a low boarding height, and easy entry and exit via the four double doors. VanHool builds these vehicles on a multi-power platform with three zero-emission options of purely battery-electric, trolley (overhead lines) and hydrogen fuel cell.

On the trolly side of the Exqui.City platform, six of the trolly versions of the Van Hool’s Exqui.City are to hit the streets of Pescara in Italy from the middle of this year. The largest order of these came from Norway in 2018, when 58 units were ordered for the city of Trondheim for operation in 2019.

VanHool says that Nobina is the largest public transport service provider in Nordic countries. Nobina has an eclectic approach to bus manufacturers, having used electric buses from BYD, MAN, Volvo and Ebusco.