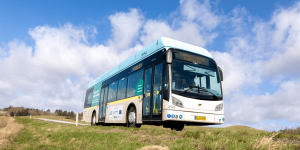 The three buses are from an order placed in spring 2019 and were delivered between 10 and 16 March. Denmark has set itself the goal of making public transport emission-free before 2030 – which is why Aalborg has chosen FCEV.

The special feature in Aalborg is that the vehicles are used by different operators. Line 17 is operated by Keolis, line 72 by Arriva. Within the framework of the EU project 3Emotion, the buses are to be used in the North Jutland region for an initial period of three years – however, the specialist website Sustainable Bus expects the vehicles to be taken into regular operation after this period.

A new hydrogen filling station has also been built in Aalborg for operation. At the plant of the Danish operator Green Hydrogen, hydrogen is produced on-site using an electrolyser and green electricity and stored in three large tanks.

Van Hool’s A330 is also on the road in Germany: Cologne’s public transport operator RVK ordered 35 units, the Wuppertal public utility company has ordered ten. These buses are being funded by another EU program called JIVE 2.

The A330 is a 12-meter bus with space for 78 passengers. The vehicle itself is built by Van Hool, the fuel cell is from Ballard. Siemens is supplying the electric drive for the A330, which has an output of up to 160 kW. The hydrogen tanks can hold up to 38 kilograms of H2, which should be sufficient for a range of 350 kilometres.