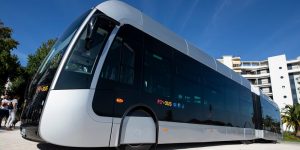 The fuel cell technology for the buses, which also feature batteries, comes from Ballard Power Systems. The 18-metre-long articulated buses offer space for 125 passengers and can cover more than 300 kilometres per hydrogen filling.

The hydrogen express buses are part of a major conversion of the public transport system in Pau. In the city in the south of France, they operate on their own express bus line, which is six kilometres long and comprises 14 stations. 85 per cent of the route runs in a protected lane, with the express buses having priority at junctions. Even in dense traffic, the journey time of 17 minutes should be adhered to and the route should be attractive in comparison to other means of transport.

The local transport company SPL STAP (Société de Transport de l’Agglomération Paloise) is working with Keolis on the project. In addition to the hydrogen express bus in Pau, Keolis has already commissioned express bus routes in Amiens and Bayonne-Biarritz in France this year – but with battery-electric buses. Keolis had recently made headlines when the company ordered 88 electric buses from Yutong for use in Oslo. In addition, Keolis recently won the order to operate 300 electric buses in three Dutch provinces from the end of 2020 and has already ordered 259 electric buses from BYD.

Van Hool’s ExquiCity18 Fuel Cell model used in Pau was presented at Busworld in Brussels in October. According to CEO Filip Von Hool, however, the model is not bound to the tram design. “the same platform will be used to offer an articulated fuel cell bus in classical look, so not designed for BRT,” Van Hool said in an interview. “In this way, we will have a complete range of fuel cell buses, with both the 12 and the 18-metre version.”