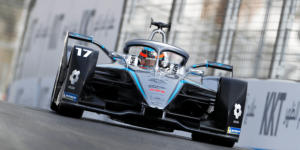 The new Formula E season in Saudi Arabia began with a one-two for Team Mercedes-EQ with Nyck de Vries in first place. The second race in Diriyah was won by Edoardo Mortara (ROKiT Venturi Racing) in a Mercedes customer car.

In the first race, world champion de Vries finished ahead of his teammate Stoffel Vandoorne, who had secured pole position in the new qualifying format. Third was Briton Jake Dennis from the Andretti team, but already eight seconds behind. Dennis had driven for BMW i Andretti last season and also scored his first race win in his first season. After BMW’s withdrawal at the end of the season, he remained loyal to Andretti.

In the second race, world champion de Vries started from first place on the grid and was in the leading group for a long time, but dropped back to 10th place in the final phase of the race after contact with former champion Jean-Eric Vergne in the DS Techeetah. Swiss driver Edoardo Mortara of ROKiT Venturi Racing took the race win ahead of Dutch driver Robin Frijns (Envision Virgin) and Venturi team-mate Lucas di Grassi. Since both Venturi cars are Mercedes-EQ customer cars, the Swabian company’s e-power unit seems to be the current benchmark in Formula E with two pole positions and a total of four podium finishes.

Whether this was only the case in Saudi Arabia or also applies to other race tracks will become clear on 12 February at the third race of the season in Mexico City. There, Mortara will compete as championship leader with 33 points ahead of Mercedes factory drivers de Vries (29 points) and Vandoorne (28 points). Dennis, the first non-Mercedes, follows in fourth place, but is tied on points with ex-Audi driver Lucas di Grassi, who has switched to Venturi after the Ingolstadt-based team pulled out.

The best-placed German driver is Porsche driver André Lotterer (seventh with twelve points), who narrowly missed the podium in fourth place in the second race. Lotterer had not scored any points in the first race. His team-mate Pascal Wehrlein is championship 12th with two points. Maximilian Günther, who had switched to Nissan after the BMW withdrawal, remained without championship points in the first two races for his new employer.

Mercedes-EQ will also withdraw from Formula E after the current season. Season 9, which starts in December, will see the introduction of the Gen3 race cars, the third generation of Formula E cars. Other manufacturers such as Porsche, Nissan and Jaguar have committed to Formula E, and Maserati is also joining for Season 9.