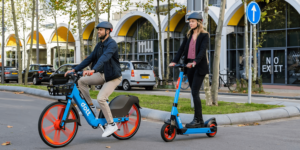 There is news from the European micro-mobility company Dott. The business today announced a $70Mn extension to its current funding round and plans to extend an already rapid expansion.

Dott, which is among the more integrated competitors to Lime and similar to Tier and Voi, had launched the Series B funding round last Spring. Today’s extension brings the total funding raised to over 150 million dollars (about €132Mn).

While perhaps among the lesser-known scooter businesses in terms of publicity, the company has grown strongly and sustainably. Co-founder Henri Moissinac looked back at a career at Facebook, eBay and most importantly, Uber and Ofo before launching Dott in autumn 2018. Dott has since grown its operations to 36 cities in nine countries across Europe and, at the end of 2021, added 10,000 e-bikes to its fleet of over 40,000 e-scooters. The number of trips has increased by 130% compared to 2020.

“We reached a significant milestone for our business in 2021, launching e-bikes to extend our offer with a vehicle that is more familiar to many people and broadens the appeal of our service,” commented CEO Henri Moissinac. “Starting 2022 with additional funding will propel our growth and allow us to offer environmentally friendly travel to more people.”

The press office added the new investment would enable Dott to accelerate the rollout of its new e-bikes, invest in product development and expand into new cities and countries. More details of said expansion have yet to follow.

The new investor abrdn through its Head of Strategy Innovation, Private Equity, Alistair Watson, added that Dott was well-positioned to be a leader in the category (of sustainability), offering a high-quality product that has been recognised with significant growth in 2021, alongside a responsible business model which takes a rigorous approach to minimize its carbon footprint.”

This low-carbon strategy reportedly includes news of voluntary commitment to more sustainability in all areas such as electric pick-up vehicles signed by Dott in 2020 together with Tier and Voi.

Tier and Dott were no strangers to each other then. In Paris – under the mayor Anne Hidalgo re-elected for her vision for sustainable transport and greening of public space – the two EU companies and Lime were granted permission to operate the Paris micro-mobility market, while all other operators had to pack up and go.

Dott last autumn was also selected to be part of the trial roll-out of electric scooters in London.

Apart from France and the UK, Dott is also active in Belgium, Finland, Germany, Italy, Norway, Poland, and Spain. They have a staff of over 500, with the main teams located in Amsterdam, London, and Paris.

The service has also gone online in Free Now’s app, first in Poland and Germany, with Italy, Spain, France and the UK to come.