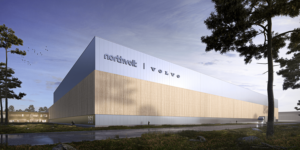 Volvo Cars and Northvolt have announced the location of their planned joint battery cell factory: it will be built in Gothenburg, Sweden, from 2023 and is expected to be operational in 2025.

The factory will have a potential annual production capacity of up to 50 gigawatt-hours, according to both companies. This will enable Gothenburg to produce battery cells for around half a million electric cars per year. The cell factory will be built in the Torslanda district in the immediate vicinity of Volvo’s vehicle plant there.

The two partners did not disclose the exact amount of the investment in the cell factory. It is part of a total investment of 30 billion Swedish kronor, or about 2.9 billion euros. However, the sum also includes the construction of a joint research facility for batteries.

As Volvo states in the announcement, the Northvolt factory will not only supply the Torslanda plant, however, because the battery cells are to be installed in both Volvo-branded BEVs and Polestar vehicles – Polestar has so far manufactured its cars exclusively in China, while the Polestar 3 will soon be assembled at Volvo’s US plant in North Carolina.

The two partners do not give details of the battery cell in the announcement. A photo published to accompany the announcement shows a prismatic cell – but there is no information on the cell chemistry or its energy content.

The cell factory complements the research and development centre in Gothenburg announced as part of Volvo Cars’ joint venture, which is due to come on stream in 2022. “Our battery cell partnership with Northvolt is key to our strategic ambitions in electrification,” said Håkan Samuelsson, CEO of Volvo Cars. “We are committed to becoming a leader in the premium electric car segment and selling only pure electric vehicles by 2030.”

“Establishing this gigafactory in Gothenburg is a decisive move, both to continue to transform one of the most dynamic automotive regions in the world, and to become the leading global supplier of sustainable batteries,” says Peter Carlsson, co-founder and CEO of Northvolt.

For the young battery company, the factory in Gothenburg is another important step. Earlier this year, Northvolt announced that it had produced the first prismatic battery cell at its first factory, Northvolt Ett, in Skellefteå, Sweden, on 28 December.