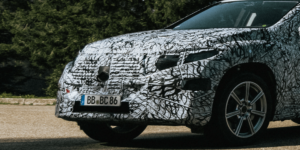 The SUV offshoots of the electric models EQS and EQE announced by Mercedes-Benz will be launched at the end of 2022, according to a media report. The article also mentions the first key technical data.

Like the EQS and EQE sedans, both models are based on Mercedes’ all-electric EVA platform. Due to their similarity, they are also being developed in a joint engineering programme, which should shorten the time to market.

With a length of 5.16 metres, the EQS SUV would be a few centimetres below the sedan (5.23 metres), while the EQE SUV is to be 4.85 metres long – and thus only about ten centimetres longer than a Tesla Model Y. According to the report, both models will adopt the sedans’ aerodynamically optimised design with smooth surfaces and curved lines. However, the magazine quotes a senior manager as saying that it is not the exterior but the interior that will be “a convincing argument for buying this car”.

There are no surprises when it comes to the powertrain: According to the report, the larger EQS SUV will be offered exclusively with all-wheel drive and will take over the drive of the EQS 580 4Matic: two electric drives with a combined 385 kW draw their power from a 108 kWh battery. The Maybach SUV will also be based on this variant “with a subtle increase in performance” – Mercedes had shown a corresponding concept car at the IAA in Munich.

Like the sedan, the EQE SUV will rely on the 90.6 kWh battery. Unlike the EQS SUV, according to Autocar there is a choice between rear-wheel drive with one motor and all-wheel drive with a second electric motor on the front axle. The basic model with one motor will be sold as the EQE 350 SUV and will have an output of 215 kW, according to the report. Like the sedans, both models rely on a 400-volt architecture.

According to the information from Autocar, the range of both SUV series is likely to be further expanded, including AMG models. Mercedes had also shown the first electric AMG at the IAA.