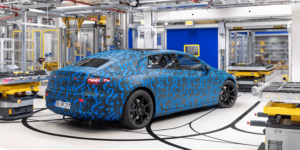 Production of the EQA will then also follow next year at the German-Chinese joint venture Beijing Benz Automotive (BBAC) in Beijing for the Chinese market. Production of the second compact electric vehicle, the EQB, will start in 2021 at two locations: at the Kecskemét plant in Hungary and also at BBAC in Beijing for the local market. With regard to Kecskemét, the automaker says that a location decision that has just been made.

Meanwhile, the EQS will start rolling off the production line with the S-Class in Factory 56 at the Sindelfingen site in the first half of 2021. In addition, the Bremen plant will begin producing the EQE in the second half of 2021, followed shortly thereafter by the Beijing plant. The US plant in Tuscaloosa is preparing in parallel for production of both the EQE SUV and EQS SUV in 2022. In connection with the six electric product ramp-ups by 2022, Mercedes speaks of a ramp-up “fireworks display.”

A total of eight Mercedes electric vehicles are to be produced at seven locations on three continents in two years. This includes the EQC e-SUV already launched and the EQV large electric sedan rolling off the production line in Spain. For the time being, the Stuttgart-based company will remain true to its flexible production strategy. This means that the EQ models will be integrated into existing production and will therefore come off the same production line as vehicles with combustion engines or plug-in hybrid drives.

The model offensive at Mercedes will be flanked by an expansion of the company’s internal battery assembly network in Europe, North America and Asia. The commissioning of further factories in Untertürkheim/Hedelfingen in Germany and in Jawor, Poland, is imminent. This comes in addition to the sites in Kamenz in Germany, Bangkok in Thailand and Beijing, China. The automaker also says it is preparing for the start of production in 2022 in Brühl, Germany, and Tuscaloosa, USA.

Markus Schäfer, Member of the Board of Management of Daimler AG and Mercedes-Benz AG says Mercedes is consistently pursuing the path to CO2 neutrality with its “Electric First” strategy and is investing massively in the transformation. Schäfer explains that the Mercedes portfolio is going electric and with it, the company’s global production network, but also battery factories: “We want to be a leader in the field of electromobility and are placing our focus on battery technology in particular.” He said that the German automobile giant is relying on what he calls a “comprehensive approach” that ranges from basic research and development to production and includes strategic cooperation. In 2030, Mercedes aims to manage more than half of its sales with EVs, plug-in hybrids and fully electric vehicles.

At the same time, the automaker’s flexible manufacturing strategy is reaching its limits. Ola Källenius, Chairman of the Board of Management of Daimler AG and Mercedes-Benz AG, recently confirmed the intention to focus on proprietary electric platforms in the future: “The strategy aims to focus on the activities that are critical to success: electric vehicles on independent platforms and proprietary vehicle software,” Källenius said. To that end, there will be more electric models not only from the EQ brand, but also from AMG, Maybach, and the G-Class, which has apparently been given a special designation because of its importance. While AMG is also to act as an electric high-performance brand and Maybach is to offer electric luxury, the EQ brand will in the future “come up with new high-tech products that are based on proprietary software.

To this end, there will not only be further electric models from the EQ brand but also from AMG, Maybach and the G-Class, which has apparently been given a special designation due to its importance. While AMG is also to act as an electric high-performance brand and Maybach is to offer electric luxury, Mercedes-Benz says that the EQ brand will start addressing “new customer groups with new high-tech products based on independently developed electric platforms”.