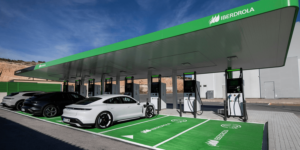 As part of its cooperation with Porsche, the Spanish energy supplier Iberdrola has installed what it claims is the largest ultra-fast charging park for electric cars in southern Europe. It is on the A70 motorway in Elche, Alicante, and one of 35 planned HPC hubs.

Raquel Blanco, Global Director of Smart Mobility at Iberdrola, stressed that these types of infrastructures “are pioneers in our country and anticipate the future of electric vehicles. They are committed to innovation and the latest technology, with ultra-fast charging chargers and very high power (400 kW) that make a unique charging experience possible due to their speed and simplicity”.

The agreement with Porsche goes back to November 2020 when the partners planned to set up 35 high power charging parks. At the time, the first 20 were scheduled to open through 2021. However, it appears the stop in Elche is the first of its kind and today’s update mentioned another three were scheduled to go online shortly, also in the Comunidad Valenciana region. Other hubs were in “a very advanced construction phase and others pending the necessary administrative permits,” so Porsche Iberica.

Images of the Elche facility show HPC columns under a black and green roof – the black part has Porsche lettering, the green part reads Iberdrola. It is also noticeable in the parking spaces in front of the charging stations that some have green markings on the ground, but the two slots under the black Porsche roof do not. Whether this was for design reasons or whether these charging spots are reserved exclusively for electric Porsches is unclear from the two notices. However, when announcing the cooperation in late 2020, Porsche customers were to get preferential tariffs, i.e., charge at all other Iberdrola charging points in Spain for an initial six months free of charge.

Said ultra-fast charging sites were also part of the plan from the outset. Iberdrola wanted to install 15 sites at strategic nodes with more than 300 kW of power per unit and associated with battery storage systems to increase the efficiency of the facilities.

“At Porsche Ibérica, we are aware of the delay that our country is experiencing in recharging infrastructures, but instead of maintaining a passive attitude, we took a step forward to lead the creation of an ecosystem that allows both our customers and users of electric vehicles in general, to travel along the main roads of the Peninsula with absolute normality”, stated Tomás Villén, who heads the company’s Spanish unit.

For Iberdrola, the Porsche cooperation is part of a comprehensive e-mobility advance. By 2025, the utility intends to invest 150 million euros in installing 150,000 charging points in households, companies, cities and along highways and country roads. The roadmap also envisages the installation of charging stations in Portugal, Italy and the UK. However, the focus remains on Spain.

Apart from Porsche, Iberdrola has already entered into several partnerships. For example, on behalf of Mercedes-Benz, the utility will supply and install charging stations for all private and commercial buyers of EQ models in Spain and supply them with green electricity. At the same time, the company is pushing ahead with equipping filling stations with charging points under agreements with Avia, Ballenoil and Valcarcel. Other projects are in progress with companies such as Ikea, McDonald’s, Telefonica, REE and Auchán. Iberdrola will also develop e-mobility services for Renault’s electric car-sharing Zity and Ferrovial. The most recent deal saw Iberdola touchpoints with Volvo Cars to install charging stations at their dealer network in Spain.

Juice Technology expands into the UK and Ireland