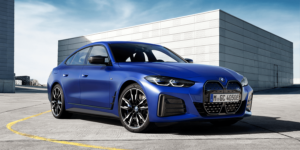 After the iX, BMW is now also launching the i4 on the Chinese market. The electric sedan will be offered in China in two variants as i4 eDrive40 and i4 M50 at prices starting at 449,900 yuan and 539,900 yuan respectively.

Unlike in Europe, where the i4 and iX were each introduced in parallel and delivered for the first time in November, BMW has opted for a staggered market launch in China: The first variant of the iX was also delivered in China in November, followed by two further variants at the beginning of January 2022.

Later in the year, the electric version of the 3 Series should also be launched in China. An electric 3 Series based on the long-wheelbase version is already listed on the homepage of the Chinese Ministry of Industry and Information Technology (MIIT), where vehicles must be registered before they can be sold in China. The power is listed on the MIIT page as 250 kW, which is exactly the same as the i4 eDrive 40.

Recently, BMW had acquired a majority stake of 75 per cent in the Chinese joint venture with Brilliance. In addition, BMW wants to build another plant in China to increase its production capacities – also for electric models.