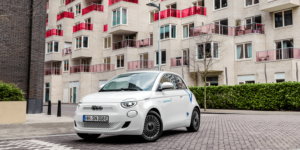 Stellantis gave new details on its electrification strategy when presenting its 2021 financials: Fiat and Abarth are to become pure BEV brands in Europe from 2027 onwards.

Until now, Fiat gave a rough time window for decarbonising all car models of between 2025 and 2030 for this. At the time, the reasoning was that Fiat would then become an all-electric brand as soon as electric cars were cheaper than comparable combustion engines.

Whether this is now forecast for 2027 in the Stellantis calculations or whether there are other reasons behind the decision is not clear from the presentation. On page 10 of the annual report, the company simply states, “100% BEV portfolio by 2027 in Europe.”

Currently, Fiat has three electric vehicle models in its lineup. The best-known representative is the electric 500, which according to Stellantis was the best-selling BEV in twelve countries last year – Fiat sold 44,000 units worldwide. The electric Ducato and electric Scudo commercial vehicles are also in the range, and an e-Ulysse is to follow this year. Rumours of an electric Panda have been circulating for some time. Fiat currently still offers the old 500 with internal combustion and hybrid drives, as well as the 500X, 500L, the internal combustion Panda and the Tipo. So far, there are no concrete statements on the e-portfolio from 2027.

With Fiat and Abarth, the concrete dates for the Stellantis brands five and six are now fixed, which will do without the combustion engine in the future, at least in Europe. Stellantis had already announced that DS would become pure electric car brands from 2024, Lancia from 2026, Alfa Romeo from 2027 and Opel from 2028.

In addition, Stellantis has updated its model planning for 2022 and 2023. The planning is divided into BEV (green), PHEV (blue) and FCEV (gray), including some previously unknown models with the abbreviation TBA (to be announced). In total, Stellantis lists 13 new BEVs and eight PHEVs through the end of 2023.

The as-yet-unknown models include two Citroen models, a Fiat brand model (possibly the E-Panda), an unknown all-electric Jeep, and the BEV and PHEV versions of the Opel Astra and Peugeot 308 compact models, including their station wagon offshoots, that have been announced or can already be ordered in some cases. In the commercial vehicle segment, Stellantis lists the already announced Fiat e-Scudo and Ram ProMaster (an offshoot of the e-Ducato) as well as a TBA model from Fiat Professional.