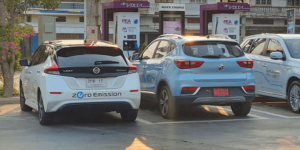 In April last year, the Thai government already sped up its plans to transition the country’s automotive sector to electric mobility. The new incentive package includes a reduction in import duties this year and next by up to 40 per cent for ready-built electric vehicles priced up to 2 million baht and 20 per cent for those priced between 2 million and 7 million baht (55,000 – 192,000 euros). The government will also cut excise taxes on imported electric vehicles from eight per cent to two per cent. Eligible manufacturers will also receive subsidies of between 70,000 baht (1,922 euros) and 150,000 baht (4,119 euros) for each electric car and 18,000 baht (494 euros) for electric motorcycles.

Thailand is already an automotive production hub, the country aims to capitalise on its transition to becoming an electric vehicle production hub. This is bolstered by a good supply of nickel for battery components from neighbouring Indonesia. Thailand already exports 64% of its manufactured vehicles abroad. Companies with electric vehicle component and production facilities in Thailand include, Daimler, Toyota, Nissan, Honda, BMW, Mercedes, Evelomo, Foxconn, Gogoro, and more recently, SAIC. The production of zero-emission vehicles and compontents in the country includes both battery electric (BEV) and hydrogen fuel cell vehicles (FCEV) spaning the gambit from micromobility to heavy duty-long haul vehicles.

Thailand is geographically well-positioned to serve Asian markets and is bolstered by nickel resources close by Indonesia, representing a quarter of the world’s nickel resources. For the Southern Hemisphere, South Africa is an emerging market that has identified the need to develop its EV capacity that Thai production capabilities would well serve. The new incentives just approved also include the slashing of income tax rates from 35% to 17% for skilled foreign professionals in targeted industries.