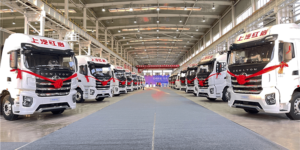 SAIC Hongyan, a heavy-duty truck subsidiary of SAIC Motor, has commissioned a fuel cell truck production facility in Ordos, Inner Mongolia, and manufactured the first vehicles. The plant is designed for a production capacity of 3,000 trucks per year.

The plant was built as part of a project for the industrial deployment of 10,000 fuel cell heavy-duty trucks. The site covers an area of 10,000 square metres, where assembly, testing and deliveries of the heavy-duty vehicles are carried out. Technical specifications of the vehicles are not mentioned in the article on the news site Gasgoo or in the announcement from SAIC itself.

According to SAIC Motor, the launch of the production facility was preceded by a contract with Ordos Municipality to invest in projects related to the New Energy Vehicles (NEV) industrial chain. SAIC Hongyan broke ground in October. So it will only be about three months before the site goes into operation.

The Ordos Basic is rich in oil, natural gas, helium, coal, uranium, geothermal and other energy resources – which clearly requires a lot of trucking activity. In other mining locations, notably Australia, heavy-duty trucking is moving towards zero-emission infrastructure, among other things, because hydrogen fuel cell operates without fumes in underground circumstances but can deal with heavy loads and longer distances.

SAIC mentions the Chinese government’s implementation and industrialisation of the hydrogen energy industry chain through cooperation between government and enterprises and upstream and downstream enterprises. It seems the fuel cell truck project is in coordination with a green hydrogen production plant called the Tianlong plant in Erdos. The goal is for this to form a synergy with SAIC Hongyan’s Chongqing manufacturing base to better meet the demand of the new energy heavy truck market. The establishment of the plant and the fuel cell truck manufacturing capacity should further accelerate the establishment of Erdos as the largest green hydrogen production and output base and fuel cell heavy truck application base in China.

Meanwhile, in Thailand, SAIC focus is on battery production

SAIC is also expanding its production capacities for battery-electric vehicles in Thailand: The Thai-Chinese joint venture SAIC Motor-CP, which produces the MG brand cars, is planning a factory to produce batteries for pure electric vehicles, according to a media report. By 2023, the MG factory in Thailand will produce BEVs for both the domestic and export markets.

A total of 25 billion baht (about 667 million euros) is to be invested in the construction of the factory as well as the development of technologies. The financial resources are to come from the parent company. “We already have a battery production facility for plug-in hybrid electric vehicles in Chon Buri, but we want to expand production capacity to produce BEV batteries to support exports,” said Zhang Haibo , president of SAIC Motor-CP Co and MG Sales (Thailand).

Referring to him, the report further said MG also plans to conduct a feasibility study for a battery recycling plant. The EV industry is growing faster “as new Chinese automakers launch more EVs,” the president is quoted as saying.

Bollinger to refocus on commercial vehicles