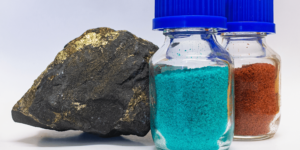 The Defense Production Act authorises the US president to require industries to produce certain goods – in this case, lithium, nickel, cobalt, graphite and manganese. The move is intended to minimise the US’s dependence on foreign supply chains. The Defense Production Act, or DPA for short, “provides for various financial measures, such as loans, loan guarantees, purchases, and purchase commitments, to enhance, expand, and maintain domestic production capabilities necessary to support national defence and homeland security procurement requirements.”

The White House released a fact sheet announcing a related directive authorising Biden to use the PDA. With this, the US government says it wants to “secure a reliable and sustainable supply of such strategic and critical materials. The United States shall, to the extent consistent with the promotion of the national defense, secure the supply of such materials through environmentally responsible domestic mining and processing; recycling and reuse; and recovery from unconventional and secondary sources, such as mine waste”.

If Biden signs this directive, companies will be able to more easily access government funding for specific projects and feasibility studies that will extract the aforementioned materials of lithium, nickel, cobalt, graphite and manganese.

Whether this will happen to the necessary extent despite the state funding is open. The e-mobility portal Electrek refers to a study by the US Geological Survey from last year, according to which the USA was completely dependent on imports for 17 mineral raw materials – 14 of which were classified as critical. “Resources in the US are small compared with countries such as Canada… and the US lacks the smelters to refine the materials from ore and existing mine tailings,” Electrek wrote at the time. “The US has cobalt assets in Missouri, Minnesota, and Idaho, but production trails other sources because the US permitting process takes years.”

Initial reports indicate that the industry is reacting positively, but also cautiously, to the White House announcement. “We’re looking forward to seeing the specifics of the president’s announcement, but the Biden administration should be commended for their efforts to secure the production of critical minerals like lithium here at home,” Lithium Americas told US broadcaster CNBC.

Biden’s plans do not only refer to the production of electric car batteries, but also to stationary storage and, for example, the installation of heat pumps in buildings. However, the US government is not only concerned with promoting alternatives, but also with easier access to fossil fuels in the short term: In the next six months, the US wants to bring an average of one million barrels of additional crude oil onto the market every day. It is the largest release of oil reserves in US history.

In mid-February, the US government had announced that it would invest three billion dollars in building a domestic supply chain for battery materials. With the outbreak of the war in Ukraine, however, not only has the political situation changed, the issue of dependence on important raw materials has become more present worldwide.