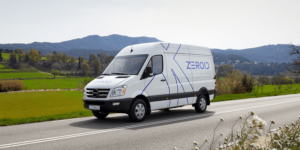 The QEV brand is called Zeroid and will offer a range of electric vans and electric buses. Production in Barcelona is expected to start in 2023 with around 5,400 electric transporters and 100 to 200 electric buses. The goal is to increase production to more than 60,000 units annually within three years and create more than 1,000 direct jobs.

Priority will be given to hiring former Nissan workers. “We do not want to and cannot lose all the human capital available in the FTA. They are the real value of reindustrialisation, neither the plants nor the machines,” says Joan Orús, CEO of QEV. “Nissan’s workforce has very valuable knowledge, a lot of experience and can contribute a lot.”

The company is not yet giving technical details about the planned models, rather general facts are known. The electric transporters are said to be delivery vehicles for the last mile. At the event in Barcelona, a minibus about five metres long was on stage, but QEV has also published pictures of a Sprinter-sized electric transporter with the Zeroid logo. In addition to the vans, eight- and twelve-metre buses with electric drive are also to be built at the plant.

The batteries for the Zeroid vehicles are likely to come from China: As reported, QEV Technologies is also the authorised service agent of the Chinese battery manufacturer CATL in Europe. The use of CATL cells for their own Zeroid vehicles is therefore obvious.

Whether it is a matter of full production or whether the vehicles are partly based on purchased platforms is not made clear in the press release. It merely states that local companies will be relied upon for production and assembly in order to boost the local economy. This wording leaves some room for manoeuvre, but Orús stresses that local manufacturing is important not only for environmental reasons, but also to lower transport costs and reduce dependence on other countries.

QEV is taking over only one of a total of three Nissan plants in Barcelona for Zeroid production. Last October, the Chinese carmaker Great Wall and the Spanish electric scooter manufacturer Silence were in talks for the other two parts of the plant. There is no current status on this.

Moreover, QEV was not associated with the Nissan plant in October because of the production of its own vehicles, but rather as a partner for the electric truck manufacturer Volta Trucks. The Spanish company does not mention in the press release whether the Volta Zero will also be built by QEV in Barcelona in the future.

Scania sends electric trucks to LKAB mine in Sweden