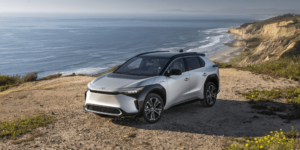 The government of Thailand is making agreements with electric vehicle companies on incentives, tax breaks and subsidies, aiming to strengthen its position as a major Asian EV manufacturing hub. This week, the government signed such a deal with Toyota.

About a third of Thailand’s vehicle market is currently covered by Toyota Motor Thailand. The company is considering launching its bZ4X EV model in Thailand later this year. Thailand’s finance minister, Arkhom Termpittayapaisith, said that consumers were waiting for major carmakers to join the scheme, and that this agreement with Toyota will, therefore, be “a leap” for the use of EVs in Thailand.

The MOU just signed by the Thai government and Toyota, allows Toyota – as with other industry operators that participate in the program – subsidy and tax privileges for its electric vehicles. The company is looking to its Toyota bZ4X model to take advantage of these conditions.

Similar agreements have also already been signed with Chinese automaker Great Wall Motor and the Thai unit of SAIC Motor, SAIC-CP Motor. The government has said that at least five more automakers are expected to join the EV support scheme this year.

Just last month, Thailand adopted new government incentives to convert half of the country’s total car production to electric vehicles by 2030. Thailand already exports 64% of its manufactured vehicles abroad. In April last year, the Thai government already sped up its plans to transition the country’s automotive sector to electric mobility. This is bolstered by a good supply of nickel for battery components from neighbouring Indonesia.

In announcing the agreement with the government of Thailand, Toyota says: “A key force to achieve such a goal is to introduce electric vehicles in multi pathway for widespread adoption.” Here, the company mentions fairly general ideas of “researching and developing diverse powertrain vehicles to meet all types of needs from customers.” Toyota says it has already “started initiatives with many sectors to study the patterns of usage, the upskills of labor to accommodate future automobiles, energy systems, and related infrastructures suitable for the context of Thailand.”

The very general statement does not specify whether Toyota is also promoting its fuel cell vehicles in the country, certainly Toyota also has significant ability in this regard.

In announcing the deal in Thailand, Toyota mentions a project there called the Decarbonized Sustainable City in collaboration with Pattaya City, which lies on the east coast of the Gulf of Thailand, about 100 kilometres southeast of Bangkok.  The project was initiated in 2020, and is a joint collaboration between Toyota, Motor Thailand, Pattaya city and Osaka Gas. In the project, “a wide range of alternative energy vehicles “will be introduced as public transport, while clean energy systems will also be implemented through biogas technologies for generating electricity for EV charging stations and other usage cases.”

The sustainable city project is meant to also stimulate investment in the electric vehicle manufacturing industry and its related sectors. Toyota says this will “play a crucial role to propel Thailand towards a premiere regional hub for Toyota in the future.”