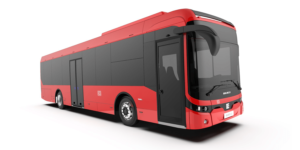 Deutsche Bahn (DB – German Rail) has today confirmed that it will “modernize” its bus fleets at a cost of around 400 million euros. From 2023 to 2026, the state owned company has ordered around 1,200 new vehicles – but only 260 of these will be electric while around 900 buses will be run on diesel fuel.

After the initial electric bus agreement was announced earlier this month, the Dutch busmaker Ebusco has been confirmed for a framework contract that will make it the main supplier of zero-emission buses in the period 2023 to 2024, with an option for two more years. Ebusco has agreed to a call-off contract for around 260 Ebusco buses for which Deutsche Bahn now has the corresponding concessions for the period 2023-2026. The maximum order volume agreed in the framework contract is up to 800 electric buses over the entire contract period.

Deutsche Bahn already has experience with Ebusco vehicles and Ebusco is known for light, modern and affordable electric buses – many of which are already in operation in different German cities, including by Berlin’s public transport provider the BVG.

Now Deutsche Bahn has also revealed that apart from the electric buses, they have also signed a much larger framework agreement with Volkswagen subsidiary MAN Truck & Bus. The German busmaker will only supply buses with combustion engines. This means that Deutsche Bahn will be purchasing around 900 new diesel vehicles – some of which will apparently be hybrids but Deutsche Bahn has given no indication of how many.

There is still the possibility that MAN will also deliver some electric buses to the state rail services operator since DB has also concluded framework agreements with second suppliers. These come into play in the event that the initial supplier cannot deliver the intended vehicles, for example because certain parts are not available. Scania was chosen for the diesel buses and MAN for the electric buses in this case – which indicates that the same ratio of diesel and electric buses will nevertheless be maintained.

In the USA currently, 16 states are suing US-American postal services after USPS awarded a contract to the US commercial vehicle manufacturer Oshkosh Defense, for the delivery of between 50,000 and 165,000 fossil fuelled vehicles over 10 years. Although the numbers with USPS and Deutsche Bahn are on a vastly different scale – in Germany we’re talking about hundreds of vehicles, not hundreds of thousands – the core issue is still the same: that a government agency buys public service vehicles running on fossil fuels despite the current climate and geopolitical crises.