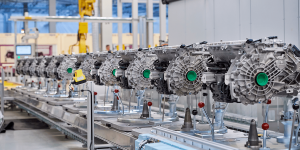 BMW has now announced that the production line for the electric drive systems was already put into operation a few weeks ago. The electric drives, which BMW calls the “fifth generation,” have been manufactured in Dingolfing since 2020, initially for the iX3. Production capacity was expanded ahead of the launch of the iX and i4, which also use this generation of current-excited synchronous motors.

The manufacturer did not specify exactly how many motors BMW can now produce there with the second line. It rather generally states that together with the “production of high-voltage batteries for plug-in hybrids of the latest generation,” capacities for the production of electric drives for over 500,000 vehicles per year would now be available. Since there is sometimes more than one electric drive in the iX (which is only available as an all-wheeler) and the i4 (which is an all-wheeler as the M50), production capacity must be correspondingly higher. The new i7 will also only be delivered as an all-wheel-drive vehicle at the market launch.

The plant now has a total of 14 production lines for battery modules, high-voltage batteries and electric drive systems. “We are seeing high customer demand for BMW electric models worldwide,” says Markus Fallböhmer, head of engine and e-drive production at the BMW Group. “That’s why we are continuing to accelerate the ramp-up of e-mobility and are further expanding our capacities in the global production network for electric drive components. Dingolfing plays a central role in this with its e-drive production competence centre.”

Drive production is located in Dingolfing’s component plant 02.20, just outside the vehicle plant. The iX and, in the future, the i7 will be built there. As reported, an electric truck is used for these plant logistics. BMW delivers the drives and high-voltage batteries for the i4 to its plant in Munich, and the drive units for the iX3 to Shenyang in China.

Therefore, not only production capacity as such is important, but also logistics. “In these weeks”, the supply centre for e-mobility is to start operations in neighbouring Mamming, according to BMW. On the one hand, the Dingolfing plant 02.20 will be supplied with components such as housings for high-voltage batteries via this centre. On the other hand, finished electric drive components will be temporarily stored and sequenced there before being shipped to the vehicle plants.

BMW also provides an update on employment at the component plant, saying that several hundred employees have been added since the beginning of the year and that more than 2,300 people now work there – compared to 1,500 employees at the beginning of 2020. “In the process, recruitment continues internally, but recently also increasingly on the external labour market,” BMW said. “Electricians for maintenance activities and plant operators are particularly in demand.”