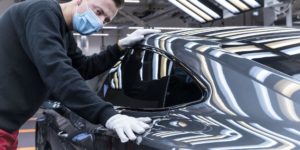 At the end of this year, the Volkswagen Group’s planning round is expected to make the final decision on two additional purely electric Audi models at the Neckarsulm site. Two saloons are currently under consideration.

According to information from the Heilbronner Stimme, these will be the electric successor to the top model A8 and a variant of the future A4 e-tron. Both models could roll off the production line in Neckarsulm from 2026.

“We are thinking about completely new vehicle concepts in the luxury class that could be a perfect fit for Neckarsulm. Purely electric, of course. From the middle of the decade, purely electric models will gradually come to Neckarsulm,” Audi CEO Markus Duesmann is quoted as saying. At a works meeting attended by around 2,000 people, works council chairman Rainer Schirmer said of the electric A8, according to the report: “We can offer premium. The car has to come to us, no ifs, ands or buts.” Duesmann added: “We, the entire board team, know and see what you are achieving here.”

So far, the main plant in Neckarsulm is a combustion engine plant, and plug-in hybrids (such as the A6 and A7) are built there at most. The all-electric e-tron GT is built in the Bölliger Höfe, which officially belongs to the Neckarsulm plant but is separate from the main vehicle plant. For some years now, the number of units of the combustion engine series from Neckarsulm has been declining, which has also affected capacity utilisation at the site.

There is somewhat unclear information about the first electric model from the main Neckarsulm plant: at the planning round in December 2021, it was said that the ‘E6’ would be built there – i.e. probably the series version of the PPE electric car A6 e-tron shown as a concept in April 2021. The Heilbronner Stimme now writes that the “first electric car already confirmed for Neckarsulm, the second generation of the A6 e-tron”, will not start until 2031.

Already in a few weeks it is to be decided that Neckarsulm will have its own battery production for e-cars – either directly at the plant or in its immediate vicinity. Duesmann was already quite specific at the works meeting: “The development of high-voltage batteries makes Neckarsulm a centre of excellence for the key technology of electromobility.” In addition, he said, the location is the lead plant for digital production and logistics. “Technologies are tested here that can later also be used in other plants of the VW Group,” says Duesmann.