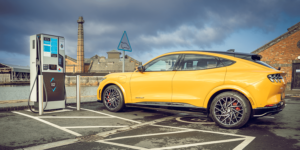 Ford wants to begin offering its electric cars exclusively through direct sales at fixed prices. Ford CEO Jim Farley has now announced this, at least for the North American market. However, it is still unclear when this will be implemented and whether the new sales system could also be extended to other markets.

Farley announced the new distribution model for Ford Model e – Ford’s electric car division created from the spin-off in March – at the Bernstein Annual Strategic Decisions Conference. Online sales are to be at a fixed price, the usual price negotiations and discounts at the dealer are to be eliminated – as is the case with Tesla or Volvo’s direct sales of electric cars, which have also been shifted to the internet.

In the case of electric cars, however, there were hardly any discounts recently – on the contrary: since the demand for the F-150 Lightning electric pickup was significantly higher than Ford’s production capacity, which has since been increased, some US dealers had demanded a premium of up to 30,000 dollars. This was a thorn in Farley’s side: Ford immediately threatened such dealers that they could go completely empty-handed when it came to supplying the F-150 Lightning this year.

The switch to direct sales, however, has not only to do with the anger about such sales practices of some dealers. At the conference, Farley calculated that direct sales could save around 2,000 dollars in sales costs per vehicle. However, he does not want to lower the prices; instead, the profit margin should increase. If purchased, the vehicle will then be delivered directly to the customer from the factory.

Ford currently offers the Mustang Mach-E, the E-Transit and, in North America, the F-150 Lightning as BEVs. Other models are to follow in Europe, for example, an electric Puma and the model built in Cologne on the basis of Volkswagen’s MEB. In Europe, Ford wants to be a pure electric vehicle brand by 2030.

As mentioned, the new sales model is to apply only to Ford Model e, i.e. the electric car business. Ford Blue, the combustion engine division, will continue to be sold through car dealerships. However, it remains to be seen when the US carmaker will make the switch to direct sales – and whether the move is also planned for other Ford Model e markets. Farley reportedly gave no details on this during his appearance.