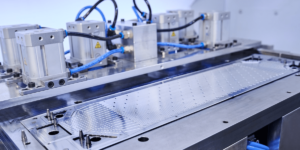 The company, of which each partner owns 50 per cent, has its headquarters and first plant in Haguenau in France, is to start operations under the brand name Innoplate by the end of 2022 and begin production at the beginning of 2024. By 2030, Innoplate plans to produce approximately 50 million bipolar plates and employ more than 120 people, according to Schaeffler.

The first customer for Innoplate’s bipolar plates will be Symbio itself. Symbio recently received an order for a project from a leading global car manufacturer. The plan is that the joint venture will manufacture the bipolar plates for this. The second customer will be Schaeffler – both shareholders are the joint venture’s “exclusive customers”. It is therefore probably not planned to supply third-party customers.

The bipolar plate (BPP) is a central component of the fuel cell; it primarily regulates the inflow of hydrogen and air as well as the outflow of water vapour and energy. This makes it a crucial component for the efficiency and effectiveness of the entire fuel cell.

According to the statement, Innoplate is to “enable and accelerate the mass-production of next-generation BPP”. The joint venture combines “the know-how of leading European automotive suppliers and a global leader in automotive fuel cell technology who together see vast potential in the developing hydrogen economy,” the company writes.

“Metallic fuel cell bipolar plates are a strategic high added value component of the fuel cell system. Innoplate will be instrumental to secure serial production capability underpinning our customers’ programs and the Hydrogen mobility market uptake, while accelerating enhanced system performance and an effective step-up in cost competitiveness of our solutions,” said Philippe Rosier, CEO of Symbio. “Furthermore, it is testimonial of Symbio’s engagement to build technological and industrial leadership in Europe.”

“The establishment of a hydrogen economy and the transition to sustainable energy resources will largely depend on the industrialization of reliable supply chains for the new technologies. Our Joint Venture with Symbio is a great example for this approach,” says Schaeffler CEO Klaus Rosenfeld. “As a global company that is headquartered in Germany, we are also very happy to partner with Symbio in France and foster the Franco-German cooperation in this important area.”

Schaeffler is also part of H2SkaProMo (“Scalable cyberphysical production systems for fuel cell stack assembly”). The aim is to economically map the production of fuel cell stacks with industry-oriented processes and scalable production systems. As part of another cooperation with Hydrogenious, the supplier is testing the storage of hydrogen in an organic carrier liquid as an alternative to pressurised storage of the gas.

Schaeffler and Symbio have now received the regulatory approvals required for the establishment of their joint venture. Preparations are already underway at the Haguenau site in Germany, where the duo has begun expanding the manufacturing building and ordered additional equipment. According to a recent Schaeffler press release, the aim is to “ensure the start of production in early 2024.”