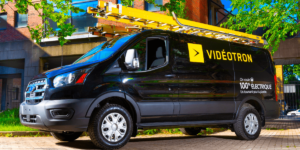 The Canadian telecommunications company Videotron is procuring 100 Ford E-Transit electric work vans. The first of the new E-Transit vehicles will be put into operation in the province of Quebec in the coming weeks.

Videotron is a well known Canadian telecommunications company. The company has millions of television, entertainment, internet landline and mobile phone users in Quebec, as well as customers in New Brunswick and Ontario.

Ford’s E-Transit seems to be doing very well with fleet orders. So far this year, Walmart has ordered 1,100 electric vans, DHL UK is to put 270 into operation, while Penske Truck Leasing ordered a whopping 740 Ford E-Transit, this order was topped the following month when DPD UK order 1000 of Ford’s electric work van. Most recently, just last month, United Rentals purchase 530 of exactly these EVs from Ford. The vans are being called an electric work-horse by the American automakers and has been put through numerous customer trials and tests including being “torture tested”.

The electric vans just ordered by Videotron will be charged at 55 charging stations installed by the parent company Quebecor Media in Montreal. More charging stations will follow at other company locations in the coming months. Quebecor has pleged to electrify the entire fleet of 1,000 cars and light trucks of all subsidiaries by 2030. Quebecor joined the initiative EV100 from the Climate Group.