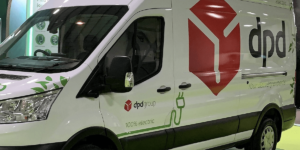 DPD UK says it has opted for the 3.5-tonne version with 135 kW engine power, long wheelbase and 12.4 cubic metres of load space. Optionally, the E-Transit is also available with 198 kW power or up to 4.25 tonnes gross vehicle weight. Since the load volume is usually the limiting factor in parcel delivery and not the payload, the 3.5-tonne version should be sufficient for DPD. Ford only offers the E-Transit with one battery variant of 68 kWh net. We summarised the detailed specifications for the E-Transit when these were released at the end of 2020.

The Ford electric delivery vans will operate from depots across the UK network. Olly Craughan, Head of Sustainability at DPD UK, described getting his hands on an E-Transit as a “really big moment”. DPD relies on right-hand drive versions to operate in the UK, which are often unavailable right at the launch of new models.

“We’ve said all along that we need the main commercial van manufacturers to step-up with affordable models and largescale production of right-hand drive vans to really get the EV revolution going in the UK,” says Craughan. “And Ford have done just that. The E-Transit is well priced, has a good range and comes with all the support you would expect from Ford.”

DPD UK’s electric vehicle delivery fleet has so far used models such as the Maxus eDeliver9, the smaller eDeliver3 and the Nissan e-NV200 and the MAN eTGE. For its part, Ford has put considerable energy into developing a robust van, calling it an “electric workhorse”. In June of 2021, Ford’s E-transit was “torture tested,” which was followed by trials with European customers in varied conditions. The effort has paid off: the van is enjoying considerable attention among fleet operators.

In the USA, E-Transit vans built in Kansas City have been ready for delivery since February and they are already selling like hotcakes. In January Walmart ordered 1,100 of Fords electric workhorses and in February, Peske Truck leasing ordered 750 of the electric delivery vans. In Europe the Ford Otosan plant in Kocaeli, Turkey, has been building and delivering E-Transits for local customers since the beginning of April. In the UK, DHL Express has also ordered 270 E-Transits for its British fleet, where the first vehicles are also to be delivered from May.